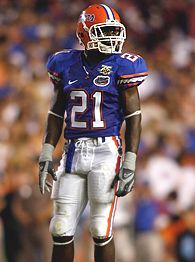 After the acquisition of Jay Cutler last year, and the addition of Julius Peppersand Chester Taylor this offseason, the biggest "needs" the Chicago Bears had entering the 2010 NFL Draft were Free Safety and Offensive Guard.  There are certainly other areas which could improved, but you can't have a superstar at every position.

How did Jerry Angelo and company do this year?  Let's have a quick recap, and you can sound off and pass out grades as you see it.

Angelo and Lovie Smith have both indicated that Wright has the opportunity to start at FS as a rookie, and he certainly has the tools to make an impact.  He'll need developing though, and defensive backs coach Jon Hoke will have to make some big strides happen pretty quickly to get Wright up to NFL speed.

Looking at the other selections though, I'm not too sure if any have the ability to make too much of an impact.  Wootton may provide solid depth at DE, but likely won't see the field much if everyone else stays healthy.  However, Angelo and Smith love their pass rushers, and that's what Wootton can bring to the table.

Moore is certainly not an instant upgrade at CB, but may be able to come in and compete.  He'll probably have his chance to impress on special teams; otherwise, he'll just be added depth.

LeFevour was at first a confusing pick, but he was good value in the 6th round.  He'll compete from day 1 with Caleb Hanie for the backup QB position.

With the final pick, an offensive lineman.  Just like last year's seventh round selection (Lance Louis), Webb will be a project player that can hopefully be molded into a backup lineman.

As far as my grading scale goes, I'd give the Bears a B-.  Wright was potentially a good pick, and we may have gotten a couple of solid backups in Wootton and LeFavour.  We didn't have a lot to work with, but with position coaches like Rod Marinelli and Mike Tice, hopefully the Bears can continue to develop into a formidable team for the 2010 season.

What are your grades?