When did you become a Bears fan?

Share All sharing options for: When did you become a Bears fan? 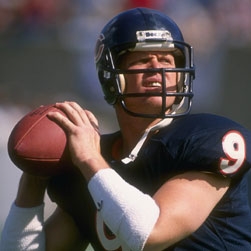 I have a confession to make.  I'm not a lifelong fan of the Chicago Bears.  Shocking right?  Now I'm not old enough to have been caught up in the Chicago Bears vs. Chicago Cardinals (who moved to St. Louis in 1960) debate, so that's not my story, but I can remember cheering for not one, but two other teams before finding the Bears, and devoting myself fully to the "C".  I know...  I know... but I was young, and I really didn't know any better.

But how different is my story?  Are there others like myself that weren't born into their fandom?  It really wasn't my fault...  really.  So don't hold my past against me or others like me.  The important thing for us to remember is that no matter how we ended up coming around to cheering for the Navy and Orange, the fact is that now we are cheering for the Bears.  Here's my story and Bear down...

Growing up I lived with my Mom, who wasn't a football fan, and when I saw my Dad he was more a baseball guy, so I had no one to help meld my young impressionable mind to any football team.  The weird thing is, the first team I called my own is a team I can't stand now.  No, not the Packers!  But at that time, the late 70's, there was one team that the media seemed to fawn over.  America's Team.  The Dallas Cowboys.  Yes, I was a Cowboy fan my first year of declaring an NFL allegiance.  I think some deep part of my psyche still needs some counseling.

Now remember the era we're talking about here.  No cable TV.  I had Monday Night Football and their halftime highlights and the CBS and NBC games.  The Cowboys were always on.  Stoic Tom Landry, golden boy Roger Staubach, giant Ed "Too Tall" Jones, and flashy Tony Dorsett.  I even went Trick or Treating that year dressed as Tony Dorsett.  I had on was my vinyl armed Cowboys letterman's jacket, and it had the Dallas Star prominently displayed on the chest.  So when I was asked ‘what are you supposed to be', I was taken aback that no one could figure out this little kid was obviously Tony Dorsett, the best running back ever.  Forgive me, I didn't know any better, but it gets worse.

After realizing my older cousin was a devout Dallas Cowboy fan, I had to switch my allegiance.  I just had too...  The Bears still hadn't entered my consciousness, so the next best and most popular team in that time was the Pittsburgh Steelers.  Add that the 1978 Steelers just beat the Cowboys in the Super Bowl and I had my "one up" on my older cousin.  This Steeler obsession lasted longer that my one year Cowboy flirtation.  Four Super Bowls and four wins for Pittsburgh will get into the head of any little kid.  My cousins hatred for them just made me love them even more.  I even realized that Franco Harris was now the best running back in the NFL.  Yeah...  remember I was young and clueless.

Now it was somewhere around the Vince Evans quarterbacking the Bears era (early 80's) when I realized that every Sunday I could see them on TV, usually on CBS channel 2.  I started watching the Bears more than the Steelers, and it dawned on me that the local Bears were on TV much more than the Steelers.  This was also around the time I started collecting football cards, so watching Bears games with my cards in hand let me see my cards in action.  (Side note; How many Revie Sorey and Brian Baschnagel cards did Topps produce?  It sure seemed like I got most of them)

I liked how this Walter Payton fellow ran the ball harder and more ferocious than Franco Harris, and the Bears defense was always laying people out.  I started thinking ‘maybe I should cheer for the Bears', I always felt a little guilty for jumping on the Steelers bandwagon, and never really felt like a true fan.  My cousin told me so in our every football debate.  But these Bears never won a Super Bowl, they weren't a playoff team (they were in the playoffs in 1977 and 1979, but I didn't know that then).  My cousin couldn't call me out for being a bandwagon fan with the Bears, because they were no good!

The odd thing is that somewhere along the way my cousin became a huge Bears fan too.  If I had to pinpoint a year when I started calling the Bears my exclusive team, I'd have to go with 1982.  I remember that strike year as Mike Ditka's first as coach and rookie Jim McMahon taking over at QB.

OK, that's my story.  I took me a while to get to the point of this post, but I'm curious...  When did you become a Bears fan?  And by the way, I now realize that Walter Payton was a much better back that either of those two guys.