"Dedicated To The Men And Women Of The Armed Services"

Share All sharing options for: "Dedicated To The Men And Women Of The Armed Services"

XFINITY from Comcast has generously agreed to support the best NFL community around -- us! As part of that effort, between now and the end of the 2010 NFL season XFINITY will be sponsoring a variety of special editorial and interactive features on our site. 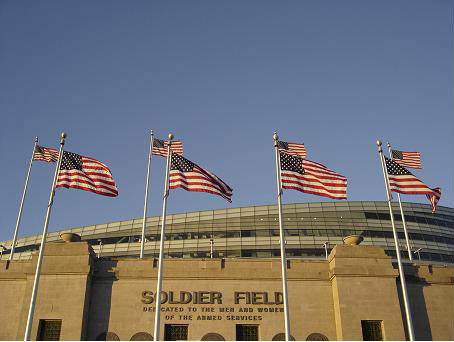 Those words are prominently displayed outside Soldier Field at 1410 S. Museum Campus Drive in Chicago, Illinois.  Soldier Field is much more than just the Chicago Bears home.  With this being Memorial Day Weekend, this is a great time to give some thoughts to the message behind Soldier Field.

It's so much more than a football stadium.  And I'm not talking about the various other events that take place in there.  I'm referring to the almost museum like atmosphere you'll encounter when exploring the stadium.  Everywhere you look you'll see things paying homage to the American soldier.  You'll find famous quotes on the benches, actual medals are on display, and the statue entitled "The Spirit of the American Doughboy" is honorably displayed in the South Courtyard.

The Memorial Waterfall is a must see.  Eight medallions which represent the eight branches of the military are set into the waterfall, and a continuous flow of water falls over the entire memorial.  On the North end of the stadium is the Veteran's Memorial.  The front of the piece pays respect to the branches of the military and their families and the back of the piece is the John F. Kennedy War Memorial with a JFK inscription.

Take a moment to think about those we've lost in service to our country, and if you have the chance to do so thank a soldier for all they do.  And be sure to have a happy and safe Memorial Day weekend.