Hi. My name is Mike Tice, and I'm a former Viking.

Share All sharing options for: Hi. My name is Mike Tice, and I'm a former Viking. 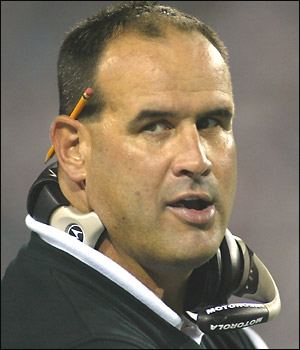 XFINITY from Comcast has generously agreed to support the best NFL community around -- us! As part of that effort, between now and the end of the 2010 NFL season XFINITY will be sponsoring a variety of special editorial and interactive features on our site.

When the Bears hired Mike Tice on January 15, a lot of Bears fans had to get over some of their built up angst towards the man for his time spent as a Viking.  Despising the big lug with a pencil behind his ear came naturally to most Bears fans.  He was head coach of the hated Vikings for 4 years (splitting games every year against Chicago), he played for them for parts of 3 years, and he was an assistant coach for them for 6 years.  He also came across as a big lug, he had that stupid pencil behind his ear, and don't forget he was the coach during the ticket scalping incident and the Minnesota Boat Scandal.  OK, that last one there is still pretty funny.  What were those idiot Viking players thinking...  Everybody sing along now...  The Looove Boooaaat...

But now...  Now he's our big lug.  Now that pencil is a nice little quirk that adds character to the man.  Now it's great to have an assistant coach with his resume.  That ticket and boat thing, who doesn't have a few skeletons in their past, and besides it's not like the Bears hired a tool like Forrest Gregg.

The last four years Tice was in Jacksonville working as their assistant head coach, and the last three years he coached their tight ends. Coaching the offensive line is his passion and he had a handshake deal in place with Jaguars head coach Jack Del Rio that if an offensive line coaching opportunity were to arise, he'd allow him to move on.  I'm sure even the most staunch Viking hater has to realize he's a hell of an offensive line coach and the Bears are lucky to have him.

From the Bears official site;

Christy's Pro Bowl birth came in his 6th NFL season, Steussie's in his 4th, and Stringer's in his 6th.  Point being he helped mold 3 players that were established in the NFL (just not at a high level) and gave them an edge to boost them to the Pro Bowl level.  I'm excited to see what he'll do with the Bears line.

Obviously his forte is helping a team rush the ball better, but his experience leads me to believe he has a good knowledge of offensive football.  In college at Maryland Tice played quarterback, he converted to tight end in the NFL, and as an assistant coach in the NFL he's worked with tight ends and most often with the offensive line.

I hope if there are still some Bears fans holding a Viking grudge against the man, they'll let it go.  After all Bulls fans learned to love Dennis Rodman.  White Sox fans came to adore A.J. Pierzynski.  Blackhawk fans adamantly rooted for Bob Probert, and Cub fans cheered for...  well, they'll cheer for anybody....  I kid!

This is actually the 3rd part in a coaches spotlight series we are running here at WCG (part 1 Darryl Drake & part 2 Dave Toub), in an effort to get to know the men behind the players a little better.