Share All sharing options for: The Superfans Present: Truths About Da Coach! 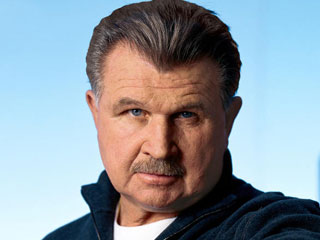 I hope by now all of you are aware of the greatest Saturday Night Live skit ever created (The Superfans).  If not...  Google it!

Bill - Welcome one and all to this special edition of The Superfans, where we'll delve into some little knows truths about one of the most iconic men in all of sports.
Pat - A man that can call himself a Champion Chicago Bear, not only as a player, winning an NFL Title with Da Bears in 1963.

Pat - But also winning a Super Bowl as their head coach, in that super year of 1985.

Carl - Leading the greatest collection of men ever assembled to do battle on a sports field, the most dominant group of athletes to ever don football gear...
Bill - He's a mans man, a ladies man, he's simply, The Man.  Michael.  Keller.  Ditka.
Todd - (unsure) Is he related to Mike Ditka? 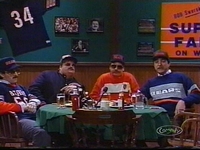 Bill - Before we get on with the show dedicated to Iron Mike, Todd has asked for some time to recite a poem he wrote about our beloved Monsters of the Midway.
Todd - Thank you Bill.  My poem... entitled... "An 85 Bears Poem"
Pat - Brilliant.
Carl - That title just drags you in.  So engaging.
Todd - (takes a deep breath, closes his eyes, then begins)

Da 85 Bears, it don't get no better,
as I sit here and write I wear my Ditka Bears Sweater.

Bill - (whispering) A Ditka reference right off the bat, I love it...

I reminisce with pride about that special year,
as I bite my Polish Sausage and take a sip from my beer.

Pat - (whispering) I can almost taste the brew and sausage...
Carl - (whispering) That's because you are have a kielbasa in your left hand and a beer in your right... (Pat nods in agreement)

Da 85 Bears, the best team without a doubt.
Ditka took care of Parcells in that first playoff rout.

Then came the Ram, I knew the Bears were a lock.
Come on, someone tell me, who the hell is Deiter Brock?

Carl - (whispering) I think he was Canadian?

Super Bowl XX, we had the Patriots coming through.
Seriously now, what was Eason or Grogan gonna do?

46-10 and Da Bears were never in trouble,
and now, My Friends I must go, the radio is playing The Superbowl Shuffle

Bill - Wow.  That was moving.  I may need a moment. (Bill puts his head in his hand)
Carl - Todd that was stupendous.  Dare I say, Todd you are ridiculous!
Todd - Thanks.  I was just in the moment...
Pat - That was like an appetizer before a main course, if the appetizer was lobster and the meal was a giant steak.  The lobster being the beautiful poem and the steak being our forthcoming truths about the legendary Iron Mike Ditka.
Bill - That it was Pat, thanks for stepping in there...  I'm composed now.  Todd, again thanks for sharing that (sniffle) Oh man...  it was just so wonderfully done...  (he wipes a tear) OK...  I'm good.  Todd thanks for that kick off to our show, but now on to the Main Event of the Evening.  The Superfans bring you, Truths about Da Coach.

1)  Mike Ditka's beard doesn't grow out of respect for The Moustache.

2)  During his playing days, Ditka had to register his stiff-arm as a lethal weapon.

3)  Then during his coaching days he had to register his sharp wit and icy stare.

4)  The Legendary Bears Sweater Vest is made with woven Kevlar thread, thus making it bulletproof.  It's also fireproof because fire knows better than to mess with Da Coach.

5)  You can lead a horse to water, but you can't make him drink.  Unless the horse is led by Mike Ditka, in which case the horse will do whatever the hell he's told.

6)  Mike Ditka didn't cry at Brian's Song.  Not because he wasn't moved, but because he doesn't cry.

7)  Mike Ditka once called a 4th time out at the end of a game.  The officials of course allowed it.

8)  His Moustache has it's own P.O. Box, and it receives more fan mail than all the Cubs and White Sox players combined.

9)  He was his High School Senior Prom King, as a 6th grader.

11)  Seventy five percent of the Chuck Norris facts were in fact borrowed from Iron Mike Ditka.  He'll take them back when he's ready.

12)  Mike Ditka doesn't kick ass and take names, he only kicks ass.  The asses he kicks will formulate a list for him on an Excel spreadsheet using the "Impact" typeface, size 14.

13)  You know there's no such thing as a free lunch... unless Da Coach asks for one.

14)  The "Most Interesting Man In The World" comes to Mike Ditka for advice.

15)  One time while a young lad, someone made fun of the Ditka name.  One time.

17)  Mike Ditka once climbed Mt. Everest because it was a slow Tuesday.

18)  If you go in the bathroom, turn off the lights, and say "Da Coach" 5 times while facing the mirror...  Ditka will appear and slap the wussy right out of you.

19)  His cell phone has never dropped a call.

20)  In the 8th grade Mike Ditka won his school's Science Fair with a model of a working volcano.  There were 17 other working volcano's made that day, but only one named Mount Ditka.

Bill - This is just a sample of some interesting facts about Coach Ditka.  I'm sure many of you have other facts you'd like to add to this incredible list.  So this is your assignment... should you choose to accept it...  add to the list, allow the list to grow, as we nurture it and water it with the blue and orange Kool-Aid.  The List will take on a life all it's own.  Until one day it's a list as grand and glorious as the man, the myth, the Chicago icon, the living legend.  Iron.  Mike.  Ditka.

Todd - (confused) ... so is Da Coach the same guy as that Keller fella?