The rumors of "King James to Chicago" have, once again, gotten the windy city sports world abuzz. With the NBA Free Agency period starting in less than a week, the Finals and the Draft so fresh in our rear view mirror, I started thinking. If one were to field a NBA team, with nothing but current Chicago Bears players, what would that team look like?

Jump with me to see which Bears made the One 'Shop Stop NBA basketball team.

After you peruse through my list and reasoning's, let me hear what players (and why) would make your squad. 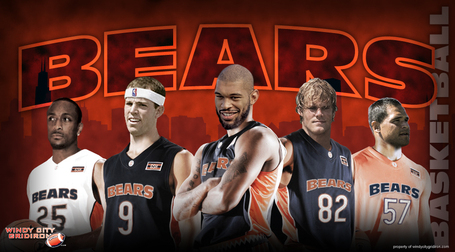 PG - Garrett Wolfe:
Your Point Guard has to be the best ball handler on the team. In the NFL, Wolfe's fumbled only once, albeit in limited action. All the more impressive, in three years, 866 touches, 5,754 yards and 57 TDs at Northern Illinois, Wolfe never fumbled... not once. With his size and quickness, Garrett "Muggsy" Wolfe will assault others faster than Roethlisberger in a bathroom stall.

SG - Robbie Gould:
Also known as the Sharp Shooter, Gould has an 85.9 shooting percentage and an outright lethal shot from distance; draining threes with assassin type accuracy. There's not another player on the court that I'd trust more if the game were on the line. That is, if the ball's past half court.

SF - Greg Olsen
Deceptively fast for his size, Olsen could carve his niche in the NBA as a Small Forward. While he might refuse to go up for a rebound, his ability to flop and sell a foul would be rivaled by none. G-reg has all the tools to be one of the NBA's best, if he would only live up to his potential.

PF - Julius Peppers:
A natural fit and a great compliment to the physical style of Kruetz, Peppers will be our Charles Barkley. "Sir Julius" played Power Forward in high school and was voted All-Conference four consecutive years. He also played PF as a walk-on at the University of Carolina, where he was a key reserve. Peppers will be our play maker on offense, while dominating on defense. He'll make offensive players look as silly as Jerry Angelo on day one of a NFL Draft.

C - Olin Kreutz:
I know, I know. Kreutz doesn't have the typical size to be a NBA Center. But what he lacks in height, he'll make up for in toughness. Kreutz was named one of the 10 most feared players in the NFL, and has broken a teammate's jaw... twice... so far. He'll be our Bill Laimbeer, and players will fear driving to the basket.

6th Man - Israel Idonije
There's not a better player in the league at coming off the bench. He's known for both his versatility and his durability. He can play big or small, play inside or outside, he can block shots. Idonije would be the league's best sixth man.


Other news and notes from around the league:
• Jay Cutler had three passes stolen from him in last night's match-up, extending his streak to 14 games.
• Allen Iverson is teaming up with Tommie Harris to record the sequel to Iverson's hit single, Practice.
• Devin Hester was ejected from Monday night's Bobcat's game, after continuously yelling gibberish at the ref.
• Jarron Gilbert has left the NBA, and signed a three-year deal with the Paddlers of the WBA.