Last week I told you a few Bears training camp basics to get you going and this week I’d like to get a little more specific: tell you about the lay of the land and give you some more details. Specifically, I'll give information on getting autographs, a local bar that has had some Bear sightings, and donating your sharpie to the team.  This and more after the break.

First of all, let me start off by saying Olivet does a great job with their facilities.  They have plenty of free parking available immediately by the practice facilities.  They have a variety of food stands that are not too unreasonable, they have good bleacher seating, but most of all, they provide water stations free to the public.  Given the possibility of some very high heat indexes, this is a generous feature indeed.  Be warned there is little or no shade around the practice fields and you will want to put on some sunscreen or a hat or plan on getting pink.

I mentioned last week that they have a free inflatable activity area for the kids but it is too far away from the practice area to observe kids and watch practice so plan accordingly.  The stands also fill up fast, so having a lawn chair handy is usually a good idea.   They also sell programs and have a gift shop that sells Bears clothes, collectables, cards, etc.  You can get lots of good autographable material from lots of different sources right at training camp. 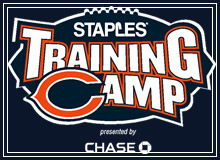 Speaking of autographs, here are some autograph tips.  There is a cordoned off area about 75 feet long and 15 feet wide where the players enter and exit the practice field.  People begin lining up early for their "spot on the wall".  I mentioned last week that players rarely autograph before practice but sometimes you can get lucky.  Practice usually lasts a couple of hours, so about an hour and a half into practice you should start to think about finding a good place on the line to stand.  Plan on having at least two sharpies handy.  Why two?  Because invariably some player will begin autographing several items with the same sharpie and may forget who it belonged to and walk away with it.  I have donated many sharpies to various players over the years.  It doesn’t happen very often but you should always be prepared.

Trying to get a player's attention standing in a mob of fans doing the exact same thing can be quite the task.  I recommend having a roster card handy (they give them out for free)  so you can be sure you know who you are yelling at.  Some of the free agents and undrafted rookies may not be name brands right now but you never know.  However no one likes being called "Hey number 3!" so having a roster card can be helpful.  I also recommend knowing where the player attended college (also on the roster card) and utilizing that in your approach.  Yelling "Go Dogs!" almost always gets Olin Kreutz to look over and I think it shows the players you’re putting out a little more effort than others in the masses.  You can get some amazing autographs at training camp with a patient approach and good positioning in the line. 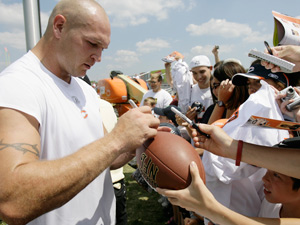 The last tidbit I’ll give you is a place called TJ Donlins.  It is a little watering hole just off  to the west of the campus on Main St. in Bourbonnais.  Go there if you feel inclined and if you're lucky you may get to drink with a few of the players. I’m not making any guarantees by any stretch of the imagination but I will tell you my story about TJ’s and I’ve talked to enough other people who had similar stories to know it wasn’t a fluke:

A few years back a buddy and I went into the bar in the evening after a 3 PM practice.  We were waiting to play a game of Golden Tee and drinking our first pitcher when in walked a very large man.  My buddy said "I think that’s Fred Miller."  I was unsure but just then the guy playing the Golden Tee game got done so we jumped on it.  We started playing Golden Tee when in walked Olin Kreutz followed by Kyle Orton and John Tait.  They had a few other players with them but they weren’t anyone I recognized.  After watching Orton drink 3 mixed drinks in about 10 minutes the players settled in around the pool table directly behind us.

About then the guy who had been playing Golden Tee before us walked up and asked us if he could join us on our next round of golf.  We said sure, and he introduced himself.  "Hi, I’m Brad Biggs."  You could have knocked me over with a feather.  Pretty soon Fred Miler walks up and starts giving me advice on how to beat Brad at Golden Tee and telling me that Urlacher could have kicked my ass at the game. (By the way, Biggs sucks at Golden Tee.)  He (Miller) said that Urlacher was better than anyone at Golden Tee.  It was a very cool evening capped off (oddly enough) by being in the restroom "using the facilities" with Olin Kreutz.  I had on some Iowa Hawkeye gear and he commented that he always thought Hayden Fry was a great coach.  Cool indeed.  Check it out if you’ve got the time. 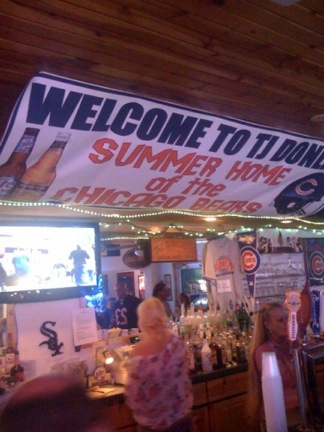 Last but not least, there is Family Night at Soldier Field.  I went last year with my son.  We didn’t have any autograph opportunities but we did get the chance to check out Soldier Field and get a great view of practice for not all that much money.  It is worth the price of admission but don’t go there thinking you’ll get up close and personal with the team.  Bears training camp in Bourbonnais is the place for that.  Happy hunting!