Share All sharing options for: The 10 Most Important Bears in 2010 - #6 Chris Harris 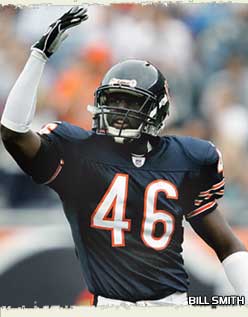 In this ongoing series to name the Top 10 Most Important Bears for 2010, I'll use the same criteria I used last year.  I'm not only going to look at any potential on field impact they may have, but also depth at the position (Would losing him be a huge blow or not?) will come into play. The individual's leadership will be a factor as well.  This list will be so subjective, there really is no right or wrong.  My hope, as it was last year, is that this will spark some solid off season debate and discussion.

I'm finally getting around to the defensive side of the ball, and at #6 will be the reacquired, and friend to WCG, Strong Safety / Free Safety Chris Harris.

Even though Chris Harris has yet to make a Pro Bowl, he brings instant credibility, and more importantly, leadership, to a position group that has been searching for answers for some time now.  Whether lining up at the free safety (as he is now with Danieal Manning at SS) or at his more accustomed strong safety (hopefully rookie Major Wright will show the necessary traits to get in at FS) Harris will bring his experience (5 years, 69 games, 64 starts) to the secondary.

Having that guy behind the defense that understands the players' positioning and responsibilities of his teammates has been missing since Mike Brown was in Chicago.  Harris will act like a coach on the field by ensuring his defenders get in the right spots if the offense is moving around.  He should be a guy the Bears won't have to worry about in regards to spacing in zone coverage.  Just knowing Harris will be where he's supposed to be will really help the corners in playing their zone aggressively.  That confidence will allow the corners to come off receivers quicker to take away the shorter routes when in Cover 2.  Even though he's three years removed from his first two years in Chicago, the Panthers ran some similar stuff.  Picking up the Lovie Smith system should be just like riding a bike.

The thing that impressed me most about Harris was his willingness to be a leader.  I don't remember the last Bear that made it a point to say he was going to help out the young players.  I believe he'll have a positive impact in the locker room as well as on the field.