The High-Cost of Fandom: An Out-of-Towners Quest to Buy Bears Tickets

Share All sharing options for: The High-Cost of Fandom: An Out-of-Towners Quest to Buy Bears Tickets 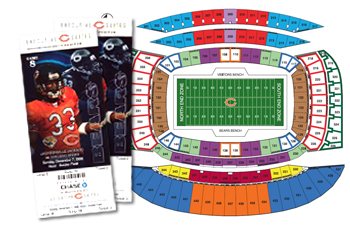 There's a lot to love about living in Charleston, South Carolina. The beaches, the southern cuisine, the "winter" weather...

However, as good as I think it is here, there are downsides as well - the most prominent being the approximated 900 miles that separates me from the Windy City and my beloved Chicago Bears.

I visited Chicago, once, as a teenager with my parents. We trekked for two days, so my father could attend a Moose Lodge convention (super fun, right?). So, even though I came to the city then, I never really got to experience what it had to offer.

Now that I'm all grown up, and have a beautiful wife who loves the Bears almost as much as I do, we're making it a goal to visit Chicago sooner, rather than later.

Follow me the past the jump to find out where the hell I'm going with this...

As soon as the Bears schedule released, and I saw that they were coming to Charlotte to visit the Panthers, I circled that date on my proverbial calendar.

About a month ago, my wife mentioned that the Cubs were hosting the Cardinals on Sunday, 9/26. Just one day before the Bears played host to the Packers on Monday Night Football. While I'm not the biggest Cubs fan (Go Sox!), she grew up as one, and has always wanted to see a game at Wrigley. While she meant this as just a suggestion in passing, I immediately wrote this off as happening and started scouring the interwebs for tickets to both games.

After a few hours, which has now turned into many weeks of searching for decent seats that won't completely break us, I've found that there are about five main options to purchasing single game tickets.

Option A:This Saturday, on July 17th, individual game tickets for the Chicago Bears 2010 season go on-sale through Ticketmaster. This is, from what I've read, the cheapest and most preferred option. However, I've also read that tickets sellout faster than Lebron James. So basically, if you don't catch a lucky break, this isn't really much of a choice.

Option B:The dreaded ticket brokers, i.e. StubHub. The filthy scum of the earth that buy up all the tickets, multiply the price they paid by 6-700% and resell them to you and me. You will be getting a legitimate ticket when you purchase from here, but like I said, you may have to give up your first born to acquire it.

Option C:Ticketmaster has set up a service where fans with tickets can basically become ticket brokers, called ticketexchange. This service works pretty much the same way as StubHub and other brokers, except you are purchasing tickets (at inflated prices) directly from the fans.

Option D:Ebay. From what I've seen, ebay is an alright alternative, but you have to be a little more careful with who you buy from. You can sometimes find a "decent" deal, but you really need to check the recent feedback/comments section of the buyer before you send payment.

Option E:Another option, one which was suggested to me by a friend who lives in the Chicago area, was to go on craigslist.org and search for tickets. He mentioned that he's purchased lots of tickets this way, and has never had an issue. The problem with that option though, is that I don't live locally and craigslist has a general rule of only buying locally to ensure that you're not getting ripped off.

So, fellow Bears' fans... I have some questions for you:

1) Are you planning on attending any games this year - home or away?

2) How do you typically buy your tickets?

3) Any suggestions on where to, or where not to sit in Soldier Field?

4) What are the chances of getting decent tickets, if any at all, off of ticketmaster on Saturday?

5) Do you have any secrets/tips to pass along to your fellow WCG-ians?

6) Do you have any success/horror stories from buying off of ebay or craigslist?

I know that I'm not the only person interested in this information. We recently got an email from another out-of-town member who's planning on attending the same Monday night game, and this could be a once-in-a-lifetime opportunity for them.

How about it WCG?

Also, while there's no OSS this week, it should return next Wednesday. If you have a fun and creative idea for a Bears-related photoshop, send me an email. If it passes WCG's 34-step approval process, I'll see what I can come up with (and give you full credit for it). Don't forget to include your profile name.