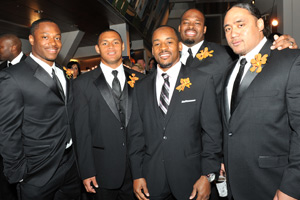 I wanted to introduce myself as I just recently joined the site. This is by far the first and best place I turn to for information regarding my favorite team. And while the vast majority of the posts on this site relate to the athletic side of the team, I thought that I would take a different route and remind everyone that there is more to Da Bears than athletics.

As I am sure many of you already know, the Bears organization as a whole is extremely involved in community events and charitable gatherings. However, many of the individual team members have created their own organizations or foundations as ways of reaching out to the community, raising awareness for specific issues, raising money for research, etc.

And while I have been known in the past to see a player complain about their multi-million dollar deal and how they don't get paid enough, without thier enormous salaries many of the following organizations wouldn't exist. It's easy for someone to say "If I made $5 millions dollars a year, I would donate to charity too." But, these are people who actually do it and create new foundations where needed. They don't just donate, they are the foundation.

And so, here is a brief list of some of the foundations, organizations and charities that play a big role in the lives of the players:

The Jay Cutler Foundation is dedicated to improving the quality of life for underprivileged children and those suffering from diabetes. It is our belief that we are investing in their future as well as the future of the community itself.

Briggs 4 Kids was established within the Athletes for Causes Foundation, whose goal is to raise awareness and funds to help those in our community

88 Wayz Youth Foundation, Inc., which was established by Desmond Clark, is a not-for-profit agency that works directly with young boys and girls from the third grade until graduating high school. The foundation provides an evidenced-based mentoring program called TALKS, as well as after-school academic tutoring and development.

The Goulden Touch Foundation is a non-profit organization, established by Chicago Bears placekicker Robbie Gould, that is dedicated to supporting research funding and providing financial support to the more than 10 million Americans and families affected by Essential Tremor.

The Tommie Harris Foundation is a registered 501C3 non profit organization dedicated to raising funds for the purpose of inspiring hope, enriching kids’ lives and building a better future for our children. The Foundation supports many programs such as Boys and Girls Clubs, Prevent Child Abuse America, Feed the Children and many youth enrichment programs.

The Israel Idonije Foundation exists to extend positive, life-changing opportunities to families and individuals in economically disadvantaged communities on a global scale. We promote the pursuit of education and knowledge, while providing programs for our youth and community members in hopes that they may actualize and maximize their full potential.

Receptions for Research - The Greg Olsen Foundation believes everyone deserves a second chance at life and it is our goal to provide our hospitals, doctors, and researchers the necessary resources to save those affected with debilitating diseases.

Adrian Peterson and his wife, Angela, recently started the Adrian Peterson Foundation at the Institute for Science and Health.The Foundation is dedicated to impacting the lives of youth by focusing on programming in the areas of education, speech and language disorders, and Christian values.

The primary purpose of the Lovie and MaryAnne Smith (LAMAS) Foundation is to provide educational and life skill opportunities to worthy young people who otherwise face barriers in reaching their educational goals.

The mission of Rashied Davis Charities is to teach students how to overcome obstacles to success through inspiration, preparation and discipline.

I think it is important for every fan to realize that while the main job of a player is to be a great athlete, so many have stepped up and become so much more than a football player. I encourage everyone to visit http://www.chicagobears.com/community/ to learn more information about player foundations and initiatives and other forms of community involvement that your team is part of off the field.