Taking a Look in the Bears History Book: George McAfee

Share All sharing options for: Taking a Look in the Bears History Book: George McAfee

Welcome back to another edition of TLBHB! Today we'll be looking at another historical Bear - and WOW was there a lot of information on him! Helmit tip to jasoniniowa for requesting this player! :]

George McAfee was nicknamed "One-Play McAfee" because of his explosive speed and the fact that he was liable to score anytime he was handed the ball. Red Grange called him, "the most dangerous man with the football in the game." Earl "Curly" Lambeau insisted he was "the most talented back the Packers ever faced." Greasy Neale stated, "George McAfee is the greatest plunging and quick-opening back I have ever seen."

Not only did McAfee help the Bears to their multiple championships, he also helped the country by serving in the Navy during World War II. Come with me after the jump to learn even more details and fun facts about this great Bear!

George Anderson McAfee was born March 13th, 1918 in Corbin, Kentucky. Soon after, his family moved to Ironton, Ohio, a town that was big on football. He was one of 12 children. His brother, Wes, was an NFL running back. (Another brother played football as well, but I was unable to find out his name.)

McAfee played football at Duke University where he was an All-American. However, he only played a little bit of football here. He played his sophomore year and during his junior year, a foot-injury cut his season short. However, he did have a great senior season. In it, he led the team in rushing, receiving, scoring, kickoff returns, punt returns, interceptions, and punting, and earned first-team all-American honors as Duke went 8-1. McAfee’s coach at Duke University, Wallace Wade, called him "a one-man offense, and practically unstoppable." Mr. McAfee helped the Duke Blue Devils to a 24-4-1 record and two Southern Conference titles.

In the spring of his senior year, McAfee batted .353 while playing center field on Duke’s baseball squad, which went 16-7. He also captured the 100-meter title at the Southern Conference track and field championships. He was elected to the College Football Hall of Fame in 1961. 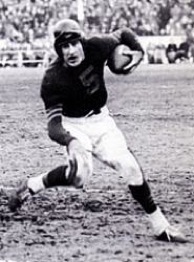 McAfee did not have the physique to play professional football. At 6'0 and 177 lbs, he was considered small, even in the 1940s. When George Halas brought him in as his 1st pick in the 1940 draft (2nd round, he traded with the Eagles, who had just drafted McAfee, to bring him to the Bears), he wondered if he made the right decision after seeing him line up next to the other Monsters of the Midway. "But just one play, which he saw McAfee whirl away from a linebacker and into a open field, convinced the Bears mentor that the rookie would indeed be a superstar."

From the start, McAfee proved himself as an "explosive game breaker, the kind of back that was a threat to go all the way every time he had the ball." He could run the 100-yd dash in 9.7, an incredible speed for that time in history. Jimmy Conzelman, the Chicago Cardinals coach in the 1940s, reasoned that McAfee was so slippery because of a hip shaft he used, as well as his speed. "That's something few really fast players ever developed," Conzelman said. "He puts the defense off balance and fakes with his head as well as his arms and body." There was one more possibility as to why he ran so fast, the realization that he gained in this first Bears training camp - avoid as much contact as possible. McAfee's way of accomplishing that goal was to "run to daylight," the same kind of thinking Vince Lombardi made famous a couple of years later.

"I never saw so many big men in my life," George says of the 1940 Bears camp. "I remember clearly, on one of the first scrimmage plays, that a rookie halfback was knocked cold trying to bring down Bill Osmanski. That play served as a valuable lesson for me," McAfee continues. "Whenever I ran with the ball, I had that picture in my mind of that back there on the ground, cold as a stone. I would run as fast as I could if there was any daylight." 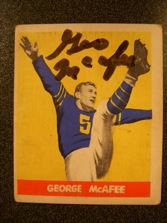 McAfee was a half back for the Bears from 1940-1941 and 1945-1950. Because McAfee served in the Navy during WWII from 1942-1945, many say he potentially missed his best football years. 1941 was a standout year for McAfee, while sharing the backfield with great running backs such as Hugh Gallarneau, Norm Standlee, and Bill Osmanski as well as HOF QB SId Luckman; he scored a league high 12 TDs in an eleven game season with 7.3 rushing yards per carry. His 12 TD total consisted of 6 by rushing, 3 receiving, 1 by punt return, 1 by kickoff return, and 1 by interception. This helped the Bears to their 2nd straight NFL league championship (where they beat the New York Giants). He also was with the Bears for their 1946 championship.

McAfee's pro career was not particularly a long one. The Bears of 1940 and 1941 were loaded with outstanding talent and so the fleet halfback averaged only about 25 minutes a game playing time his first two years. Then he joined the United States Navy and did not return until late in the 1945 campaign. He played just three games in 1945 and injuries cut his playing time to three games in 1946. He followed up with full campaigns in 1947 through 1950 but, altogether, his NFL career consisted of six full seasons and two partial seasons with what would have been perhaps his finest years spent in the service.

During his pro football career, he scored a total of 234 points, gained 5,313 combined net yards, in eight seasons he intercepted 25 passes, and he held the record for punt return average at 12.78 yards (making him the NFL punt return champion). Two of his feats include: returning a punt with 37 seconds left on the clock to win against the Brooklyn Dodgers for 75 yards during his first exhi bition game with the Bears, and running back a kickoff for 93 yards then throwing a touchdown pass to help the Bears beat the Green Bay Packers in the 1940 season-opener.

When Gale Sayers came on to the scene in 1965, writers immediately asked Halas how Sayers compared with McAfee. "The highest compliment you can pay any ball carrier," Halas would snort, "is just compare him with McAfee." While George's pro career was not incredibly long, totaling 8 seasons before and after the war, his statistics show that he did almost everything possible for a player to do with a football. He was a breakaway runner, a dangerous pass receiver, and one of history’s best punt return and kick-return specialists as shown by his record-breaking 12.78-yard average on 112 punt returns. He also played defense and recorded 21 interceptions during his career. He even passed on occasion. Not only was he known as "One-Play McAfee," but also as a headache to opposing teams. 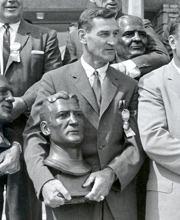 After he retired, McAfee officiated in the NFL for several years and went into the oil distribution business for 31 years. He ran a Shell Oil distributorship until he retired in 1981. He seldom spoke of his football exploits, however. His wife, Jeanne M. McAfee died in 1998, and a son, George McAfee Jr. died at age 16. Mr. McAfee died March 4th, 2009 at the age of 90. At the time of death, survivors included two daughters (Cheryl Morgan and Mary Jeanne Stouffer), a brother, five grandchildren, and four great-grandchildren. His family did not disclose the cause of death.

Here is an excellent highlight reel from chicagobears.com showing some select plays by McAfee:

And as always you can find stats here and here.

Any other players you'd like to see on Taking A Look in the Bears History Book? Send me an email and let me know! Any ideas and suggestions are appreciated!