Chicago Bears Infanity. A Look Into a "Not so Brilliant" Mind.

Share All sharing options for: Chicago Bears Infanity. A Look Into a "Not so Brilliant" Mind. 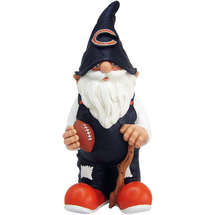 Well Bears fans we’re less that a week away from training camp and that means the stories should start to gain a little momentum as things of significance actually start happening in the world of professional football.  I plan on attending training camp next week myself so hopefully I’ll be able to give you some "live" reporting.  Speaking of that how and when do I get my official WCG press passes so I can line up some great interviews?  In the meantime, a tragic accident happened today and it got me to thinking that sometimes fans can take things a little too over the top.  And that got me to thinking even more which got me to typing which led to....  Read more rambling after the jump.

My Official Chicago Bears Garden Gnome got broken today.  I felt like I’d lost a member of the family.  Well, not my immediate family but like that cousin you met that one time at the big reunion and you kind of hit it off with but then you never saw each other again.  That family member.  My poor gnome was gone.  The wind blowing in the curtains knocked it off the shelf.  At least it didn’t take the bobble heads with it.  They survived the zephyr.  Then I started to take a long look at the "collection."   I have too much Bears crap.

Ok wait a minute.  That’s not possible.  I have a magnificent amount of Bears crap.  You can’t ever have too much of a good thing.  Right?  I mean who doesn’t have a franklin mint replica of Soldier Field?  You know the one that sits right by the Bears desk clock that sits under the Bears wall clock?  Where on the opposite wall sits the book case with Bears monopoly AND Bears checkers with the Bears cribbage board.  You should see my man cave.  It looks like Staley walked into the room and barfed Bears stuff everywhere.  So I have an ample supply of Bears junk. Like any well adjusted, mildly obsessed fan should.  If only it stopped with the stuff.

This is where it gets a little embarrassing, but I have several game day traditions.  I can’t really tell you how they started or if they would qualify as actual superstitions (or some sort of diagnosable mental disorder) but I feel weird as hell if something goes wrong on game day.  I also have a fairly tolerant and patient family who puts up with my quirks reasonably well.  Either that or they all leave the house.

First of all, every Sunday morning during the season I have ice cream for breakfast.  Big bowl, no chocolate syrup or whip cream or other toppings.  Usually its whatever feature flavor they’re selling that month.  It's a weird thing to try and order in a diner on vacation but you can usually find a pint at a convenience store. Then I read the Sunday comics and sports section.  I’ve never attempted to pull off the illusion that I "read the paper."  70% of it gets tossed, unlooked at by me.

Next I go to my closet and get a jersey.  This has become a time honored tradition in my house.  My wife knows and at least pretends to understand it (OK she humors me) and can become an accomplice when necessary.  You see, I can’t pick out a jersey.  It has to be random.  The jersey has to pick me so to speak.  So I have a closet with Bears jerseys that remains shut all week long.  I never hang up a jersey or I’d know where I put it and the magic would be gone.  So I have several (at last count 6) jerseys hanging in my closed closet.  I walk to the door and close my eyes briefly as I open the door, reach in, and grab a random jersey.  It doesn’t matter which jersey so long as it's a random one.  This makes vacationing difficult as I have to go through this procedure and have my wife pack the jersey away before I see it so when game day comes I still have my random jersey.

Lastly, I have to call my brother-in-law "Bob".  This must be done as closely as possible to 11 AM Central Time.  This gives us a good hour, should we need it, before kick off.  Bob and I proceed to discuss everything football.  We’re in a fantasy league together so we talk starting line ups.  He’s a Dolphins fan so we talk about their match up.  We talk Bears (of course), we talk about injuries, and we talk about network coverage and who's broadcasting what game.  We talk about everything football.  Then we wish each other good luck and it's time for the games.  This tradition has become so important I have called Bob from a beach in Mexico, and called him at a resort in Hawaii.  At 11AM central time.  He was less than thrilled but respected the tradition enough to humor me for 5 minutes before going back to sleep.

The only other "tradition" I have is a need to yell at the TV as though Lovie Smith and the entire organization could hear every word I was saying.  (When they actually start responding I'll be sure to let you know.)  Unfortunately, the only ones who actually hear me are my family and sometimes the neighbors if they’re outside.  And of course checking into WCG just to read the game day thread and try and set the record for most comments ever.  So that’s what I’ve got Bears fans.  How about you?  Got any great Bears paraphernalia you’d be lost without?  What are your game day superstitions or routines?  Or is it just me?  God I hope not....