Share All sharing options for: Julius Peppers Isn't The Only Lineman Headed To The Pro Bowl This Year

That's right folks, I'm definitely sitting down for a glass of that orange and blue Kool-Aid on this one. On top of other such prognostications that are better suited for a drunken vagrant sporting a Ditka jersey outside of Soldier Field, such as my proclamation that the Chicago Bears will win the NFC North this year, I'm going to step my heavily marbled frame out on that willow thin branch again for the following statement. Tommie Harris is going to be going to the Pro Bowl this year for his stellar play, and is going to rekindle the faith of the Chicago Bears faithful not only in Tommie Harris the man, but Tommie Harris the player.

Just so that there is absolutely no misunderstanding about what I'm saying, and so that there is no question about the flames or glory I'll be bathed in during the season, I'm going to restate my position in bold italic font.

*** Tommie Harris is going to play at a level not seen since the 2006 season, and is going to return to the Pro Bowl at the defensive tackle position ***

So, as the saying goes with great power comes great responsibility... actually, that may have been Spider-Man. Nevertheless, here are my reasons why Tommie Harris is going to return to form in 2010.

1. Tommie Harris is going to play up to the players next to him.

For the first time since being drafted by the Chicago Bears, Tommie Harris is going to have another legitimate pro bowler on the same defensive line. This can be easily dismissed by some by trying to point out the plethora of pro bowlers that are in similar situations, but Tommie Harris isn't other players. Tommie Harris has always been a somewhat soft-spoken guy, but a guy who wears his emotions on his sleeves. This is fantastic when he has that competitive fire, but can be terrible when he has entered in a downward spiral of doubt, and for lack of a better term self-loathing. You see, Tommie Harris lost something more than mobility when he went down in 2007, he lost his confidence, and he lost the feeling that he was playing with the best of his ability. He didn't feel right, he didn't have the exact same step he used to, and he didn't feel like he could carry the entire line on his shoulders if need be.

This isn't to bad mouth our linebacking corps, because they are one of the best at what they do, but they aren't exactly getting after the quarterback every other play. They are prototypical 4-3 linebackers, and they excel at that job, but the assist they give the line is in the form of more time to work more often than not. What this means is that without another elite talent along the line, Harris was consistently eating double teams, and trying to work through them. Of course, it didn't take long for Tommie or anyone else who has looked into hamstring injuries that even minor ones tend to linger and take away directly from that explosiveness that Tommie Harris was known for. If you can't trust yourself, then your team can't trust you. They can't rely on you, and well, it seems that fell pretty hard on Tommie.  He went from being that guy everyone thought of a team first hard worker, a guy who had an explosive first step and extremely agile to a plodding undersized lineman who got beat to the action, and then took that beating and just didn't get back up. However, Tommie definitely seems to be taking the off-season seriously this year if the pictures he posted to his Twitter account have anything to say about it. 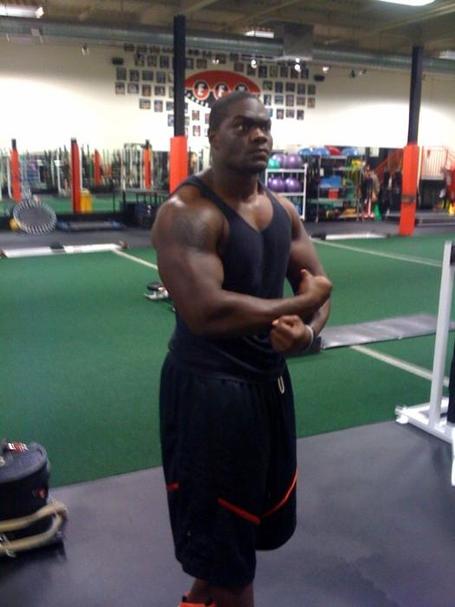 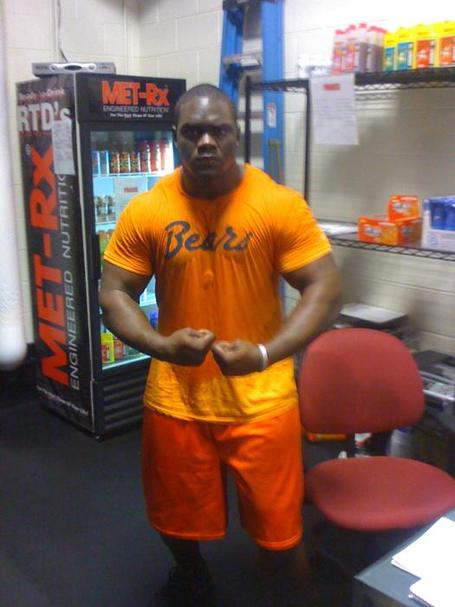 This isn't the work of a man who is ready to forget about practice, argue with coaches, and get benched. This is the rebuilding of a man possessed, rededicated to his craft. Tommie Harris is ready to live up to his promise, and to play up to having another top ten lineman on his side of the ball.

2. Tommie Harris is going to be healthy for the first time in a long time, body, and mind.

His injury at the end of 2006 is consistently undersold both in severity, and the impact it has on any football player, let alone a player with the skill set of Tommie Harris. Tommie is all about explosiveness, that initial move both amazingly quick and unquestionably strong. It was that explosiveness and agility that made Tommie a first round pick. It's also the exact thing the dual injury of the torn MCL and torn hamstring robs from a player. The torn MCL, or grade three sprain depending on what article you read, first and foremost causes instability in the knee and without a doubt directly effects not only your agility, but the trust in gripping and exploding with that leg. The hamstring is an even more problematic problem as the hamstring is one of the most important muscles in the human body for an athlete due to its role in movement, even walking or running, but specially in sprinting or that explosive start or churning motion with the legs.

Even under the best of circumstances, a pulled hamstring can last weeks, and can linger even longer. One of the most annoying issues with hamstring injury is that since, in many instances, it's partially caused by an imbalance in muscle groups, the injury of the hamstring actually exacerbates the underlying problem making it more and more likely to re-injure the same hamstring. The only way to solve that is by strengthening the hamstring, which can't even be contemplated until the initial pull is completely healed. This gets even worse when dealing with a hamstring tear, like most associate with Harris, because the shelf time is often close to six months before work can be done. This long off time usually brings even more weakening of the muscle group, meaning that the player has to get back to square one before they can even attempt to address the initial problem.

Tommie has most definitely rededicated himself in the work room, looking to be in fantastic shape. This means a lot because his body looks to be where it needs to be, and if he thinks the same then that does nothing but build that confidence back again. Swagger is more than a new Madden stat, it's a real thing that players either have or they don't. You either know you can do something, or you don't. As much as we respect a guy like Hunter Hillenmeyer, no one is going to mistake him for Lance Briggs or Brian Urlacher anytime soon. However, when it's game time, Hunter doesn't think twice about going straight on a guy like Adrian Peterson. That's the self-confidence, the swagger, you have to have as a player in the NFL.

So with that self-confidence in his physical abilities restored, and his work-ethic rejuvenated to a large extent, that leaves us one thing. Reestablishing himself with the team as a worker, and a guy who is going to give 110%, and luckily for us Tommie has already done that in large part. Tommie Harris got sat out a game last year, and while there was quite a bit of petulant childishness that not only caused the initial benching, but in the aftermath as well, it undoubtedly caused Harris to grow as a man, and as a player. You look at the games before the benching, and after, and the difference is almost night and day. The motor was turned on, and remained churning the rest of the season, and apparently carried over into practice this year as everyone is saying the same thing.

This is the best Tommie we've seen in years, and if that's the case, this is going to be the worst season in just as many for the rest of the NFL.