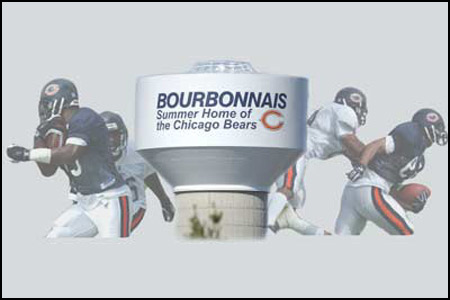 The players are arriving at Olivet Nazerenne University in Bearbonnais, Illinois as we speak, and many of them are giving some final words of thought to the media before practice kicks off at 3pm CT.

We'll be providing some updates as we go along today, but definitely keep an eye on the Twitter feeds, as there will be plenty of live updates throughout camp.  Click through for some feeds to follow, and check back as we'll pull highlights and put them up here for you during practice.

5:45 CT Note: It appears that Jay Cutler (with his precision), Dez Clark (with his athleticism), and Craig Steltz (with his ball hawking) have been three of the biggest winners in today's first practice (we talkin' bout prac-tiss).  Once the pads get put on, we'll see who really rises up to the challenge.

-First 2 kids between the age of 4-15 to meet staley at the kids zone entrance right now will each receive a VIP autograph pass for today.

-Dez Clark catches another deep ball from Hanie. He won't go away!

-Only INT of practc by craig steltz. Precision passing

-TEs ruling with their catches. Olsen and clark esp but all with great grabs

-It might rain at some point during the practice. Gray skies.

-Zack Bowman picks off a deep Jay Cutler pass. He was up in the air and bent backwards, but made the play.

-Craig Steltz with an interception. He's picked up where he left off from OTAs

-Hillenmeyer doing pushes after deflecting a pass, but failing to intercept

-Bowman stretches out and reaches back to make an impressive pick of Jay Cutler on a deep pass. Tough catch, even for a WR

-Ok. New play of the day. Hester goes up high to get a Cutler pass in traffic. Fans were pumped about that one.

-Desmond Clark steals the spotlight back

-Appears the Bears have all 80 players participating in first training camp practice. Not full pads. Helmets and shorts. JD

-Add WRs Devin Hester and Johnny Knox to the list of those impressing on day one. But it's a much different game without pads or live contact

Got someone else you want on the list? Throw a link in the comments and we'll try to pull it up here.  Also, make sure you all keep us updated as you hear and see things... we've got the best members on the internet for providing live updates, and this is your thread!