Taking a Look in the Bears History Book: Willie Galimore

Share All sharing options for: Taking a Look in the Bears History Book: Willie Galimore

TLBHB is back! Sorry for the long hiatus, I graduated college, moved back to my hometown, and visited San Antonio for a friend's wedding. Whew! But, now it's time for more important things - our next history lesson!

I got the idea to write about this player after watching NFL Network's Top Ten Elusive Runners. (Also, helmet tip to GallopingGhost for helping solidify my idea by filling me in a little more after the segment!) Unfortunately, this former Bear was one of those great talents whose life was tragically ended before it's time; however, he still made enough of an impact to inspire many different people in both in the NFL and the country. He even helped in a small way to push the Civil Rights Movement forward!

Willie "The Whisk" Galimore was born March 30, 1935 in St. Augustine, Florida. (Other nicknames include: "The Wisp" and "Gallopin' Gal.")

After graduating from St. Augustine Excelsior High School, Galimore attended Florida A&M University, where he worked as a halfback with well-known coach Jake Gaither from 1953-56. He was the only four-time All-America player at A&M at the time. Later, in 1999, he became a member of the College Football Hall of Fame in South Bend, IN. He was also a part of the Florida High School All-Century Team and the Florida Sports Hall of Fame. Check out some career (college and NFL) stats here. To sum up a little about his college career, take this quote from Costa Kittles, former Florida A&M assistant football coach:

He had something many running backs don't have, both the short stride and the long stride. You need the short stride to change directions. Once he broke clean, he had the long stride to break away from you. As a receiver, I saw him make a lot of one-hand catches like someone picking grapes from a vine. In terms of a total football player, he was the best Florida A&M ever had. 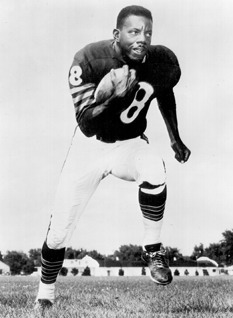 NFL films did a documentary short on Galimore, stating that he "was probably the last great find before NFL scouting became sophisticated" and that Chuck Bednarik & Doug Atkins both referred to him as one of the best runners they ever faced.

Some of Galimore's best features were his ability to move laterally and his amazing speed. Many of those who played against him believed that Galimore could run side-to-side just as fast than most men could run a straight line down the field. According to Wikipedia, "His running style could be said to most resemble the style of Billy Sims or perhaps Terrell Davis, but faster." 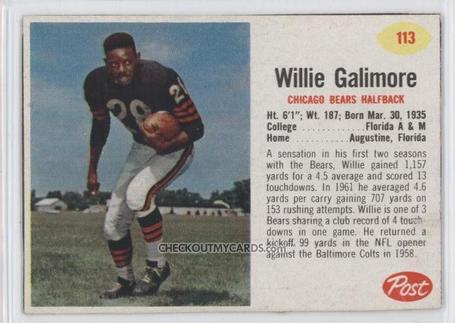 On July 27, 1964, Galimore was traveling home from training camp with his teammate John "Bo" Farrington in Rensselaer, Indiana. The automobile overturned on a country road and both teammates were killed. Galimore was 29. His funeral was in Tallahassee, at the Philadelphia Baptist Church, and later his body lay in state at Florida A&M University. He is now buried in Greenwood Cemetery in Tallahassee, FL.

The last visit Galimore took to his hometown was a very note-worthy one. He participated in civil rights demonstrations, those of which were televised and helped push Congress over the edge after contesting the Civil Rights Act of 1964 before. During these demonstrations, he became the first Black person who was able to register as a guest at the Ponce de Leon Motor Lodge (which was, obviously, an all-white establishment). This was also notable because a few months before, the arrest of the 72 year old mother of the governor of Massachusetts had made headlines because she tried to be served in a racially integrated group. Because of his activism for the civil rights movement, he has been posthumously honored with a Freedom Trail marker at his former home (57 Chapin Street) in St. Augustine. Here is more information on the Freedom Trail. Mrs. Audrey Galimore, his widow, took part in the dedication on July 2, 2007. Mr. Galimore is also depicted on a historical mural painted on Washington Street by schoolchildren and has a community center named after him in the historic Lincolnville neighborhood.

Galimore's number (#28) has been retired by the Bears. He also attended one pro-bowl during his tenure with the Bears and was a part of the 1963 NFL Champion Bears team. 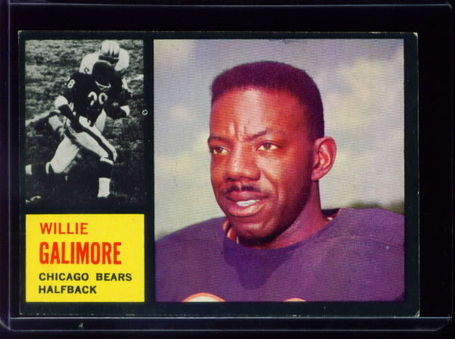 In closing, here is the excerpt from NFL Networks' Top Ten Elusive Runners that originally inspired me to write about Galimore (source here):

P.S. I definitely recommend watching this whole episode! It has Bears galore (3 Bears made the list, with 2 more making the Best of the Rest!)

As always, you can find some stats for Galimore here, here, and here.

Any other players you'd like to see on Taking A Look in the Bears History Book? Send me an email and let me know! Any ideas and suggestions are appreciated!