He's back, he isn't...  His ankle is still bad, oh wait he's healthy...  He sent text messages to his teammates, but then he didn't...  He wants a raise, or does he?  I'm sure we all knew Brettapalooza would be in full swing even before this latest media drama, but after the jump I'll take a look at some different kind of news I wish we'd see about Brett Favre.

These headlines and blurbs are all done 'Onion' style.  As much as some of us would like one, if not more of these to be true, these are all done tongue in cheek.  Some content may not be suitable for all readers...  jump at your own risk.

In a freak tractor accident while tending to his oversized garden, Brett Favre fell off his John Deere while popping the clutch a bit too forcefully looking for 2nd gear.  If the fall wasn't embarrassing enough, the slip in the manure that followed was the icing on the cake, albeit a brown and smelly cake.

Favre's Junk Caught In His Wranglers

Not sure why old #4 is going commando in the first place (He can't get a Hanes deal?), but Brett Favre has another "There's Something About Mary" connection now besides his cameo in the Ben Stiller film.  In what Favre describes as "just not a smart move on my part", and "a potentially career ending zip", Favre did indeed get his beans above the frank.

ESPN to air "The Retirement"

In an ode to the LeBron James ego-feeding TV special, Brett Favre will make an announcement of his own in a 2 hour special on ESPN.  With a cast of hundreds expected to pile into the Hattiesburg, Mississippi Moose Lodge, Favre will make an official announcement declaring his actual retirement from the NFL.  He can't possibly unretire after making a spectacle of himself to his family and friends, and making his declaration on ESPN...  can he?

That explains it, Brett busted for HGH!

It would seem the ageless and durable Brett Favre has had some help through the years.  The Wisconsin based dairy farm, The Cheesehead Cheese Factory, has been discovered to be a front for the biggest underground illegal performance enhancing drug manufacturing lab in the Great Lakes region, and their biggest, in stature and monetary contributions, to the PED factory is Brett Favre.

In a 6am raid jointly overseen by the Wisconsin State Police and the F.B.I., Farve was caught red handed on site picking up his latest supply of human growth hormone.  An anonymous state police officer on the scene was overheard telling anyone who would listen, "F@#$ that son of a b&*%@, and Go Packers!".

"There'll be no hearing or inquiry, there'll be no innocent until proven guilty waste of time.  Brett Favre is suspended indefinitely from the NFL.  And to prove I have bigger grapefruits than my spineless counterpart running baseball, I'm wiping clean all his records from the NFL record-book.  All except his well deserved interception record, he can keep that one."

In related news, noted Favre cheerleader John Madden and his famed Madden Cruiser have been missing since the news broke. 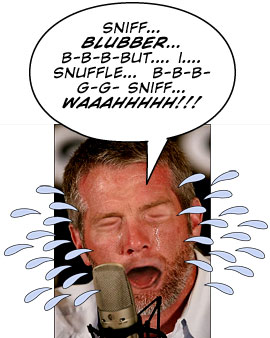