Five Questions With: Bolts From the Blue

Share All sharing options for: Five Questions With: Bolts From the Blue 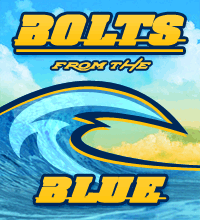 We'll have our official Game Preview later this afternoon, but in the meantime, let's have a quick Q/A session with Bolts From the Blue, SBN's San Diego Chargers website.  Big thanks to John Gennaro for taking the time to answer our questions!

In a nutshell, Merriman wants assurance from the team that he's not going to be traded so that he doesn't have to worry about it and so that he can entrench himself as a defensive leader heading into the season. I have no problem with that demand, but it got him nowhere. The team didn't budge, won't budge, and there's not an outpouring of fan support for him at the moment. Now that he realized that all he's doing is drawing attention to himself and missing reps in practice, he'll come in and start in on the most crucial season of his career.

2- What is the biggest position(s) of concern for the Chargers this offseason?
With Marcus McNeill threatening to hold out until Week 10, it's probably Left Tackle. The Chargers are pretty happy/excited with Brandyn Dombrowski, an undrafted free agent in his second season out of San Diego State who played RG and RT when needed last season, and are probably eager to see how he handles an elite pass rusher like Julius Peppers. That being said, Marcus McNeill is probably one of the top 5-10 LTs in the NFL today, so there will be still be a drop-off there. The biggest reason people are concerned about it is that it's the most important position in terms of protecting the franchise-player's blindside.

3- What would you say is the biggest improvement since 2009?
The running game. Last season the Chargers really only did one thing well, and that was pass the football. The defense was below average in just about every facet of the game (although the CBs played alright) and the running game wasn't run well by the offense or defended well by the defensive line. Yet the passing game was so good and the team scored so much so fast that they were able to dictate what the other team was going to do, and this is how they ended up winning 11 straight games.

This season, at least in training camp, the defensive line looks fantastic. It's really where the most entertaining battle is going on, because there's about 10-11 guys there that are all worthy of starting jobs and they're battling for maybe 7 roster spots. That, plus some experience for Larry English and some more playing time for Brandon Siler, should help the run D. Ryan Mathews, who impresses me more and more every time I see him, should help boost the running offense just by being an improvement over LaDainian Tomlinson circa 2007-2009. This team will be much more balanced on both sides of the ball.

4- What aspect of the Bears game could give the Chargers the most problems?
I don't know a ton about the Bears, but I'll take a shot. As mentioned earlier, the Peppers vs. Dombrowski matchup could be a total disaster. Brian Urlacher will probably do his best to introduce Ryan Mathews to the NFL with some big hits. I'm sure Jay Cutler and Mike Martz are itching to try out Antoine Cason, who is replacing Antonio Cromartie at the RCB position. Greg Olsen against rookie SS Darrell Stuckey is another matchup I could see being troublesome.

5- Who are the key Charger players for us to look out for on Saturday?
The stars of this team haven't really changed. Philip Rivers and Antonio Gates are primed for another season as good as last year's.

Keep an eye out for Malcom Floyd, who started last season as the #3 WR and is now working as the #1. He's tall and lanky, and not overly-intimidating physically. He's a special one though. Guys desperately trying to make good impressions on the coaches and fans include: Craig "Buster" Davis (WR), Shawnbrey McNeal (rookie RB), Antoine Cason (CB), Jeremy Williams (WR), Josh Reed (WR), Antwan Applewhite (OLB/ILB), Jyles Tucker (OLB) and Ryan Mathews.

Thanks again to John for taking the time to do this for our readers.  We look forward to finally having real football again!