Share All sharing options for: The Bears Den: Friday the 13th of August 2010 Edition 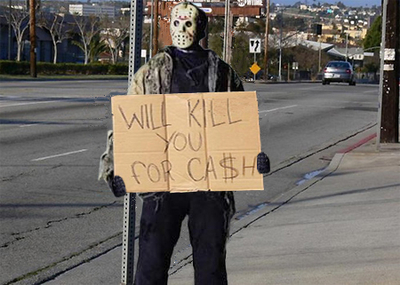 Where you narrowly avoided a "Jason X" picture, because I love it when evil gets an upgrade.
Urlacher impressed with Cutler, offense (Warning: Big Autoplay Video) - Brian Urlacher has been much more friendly with the media lately. Maybe they've replaced him with Robolacher.
Fundamentals key in Marinelli defense - Running around yelling "Give me the ball" is not, in fact, fundamentally sound.
Bears reach injury settlement with WR Robinson - I wish I could get paid for being hurt.
Chicago Bears: Rod Marinelli eager to see defense in action - I'm eager to see the defense in action, too. The fundamental difference? My job doesn't depend on it.
Follow WCG on Twitter.  It's like having dinner with Bea Arthur, Bobcat Goldthwait, and Justin Bieber all rolled into one. Except, you know, fun.
Make sure you show up here tomorrow, as we'll have our very first Game Thread of the season!  Most of us won't have the luxury of seeing the game live, so our Open Thread Chicago Bears Kickoff Party will be rockin'!

Lovie says starters could play a half vs. Chargers - I hope so. Then, when the starters destroy the Chargers second string, we can get way too into it.

Bears place RB Unga on injured-reserve list - I believe his injury will be listed as general soreness or ninja attack. Seriously, they mean practically the same thing in this case.

Cutler can call on high football IQ - I still like this trade. I mean, can you see Orton running the Martzfense? *shudder*

Bears' succession plan - They have a plan?

Say hello to Jay Cool - The team notices a change in Cutler. I think it is sorta like in Big, where one day a 12-year old is a man. Or something, I dunno, I didn't make it through this one.

Notebook: Bears speak highly of Vasher - "He's a great guy, we just don't want him playing football for us."

Rivera's influence on Bears not forgotten - I'd hope not. He took you to the Odin-damned super bowl.

Wright impressing with pass defense - Yay! That's why he was drafted!

What the Hairs Up With the Bears? - Mohawks.

SideNote: Why Ben Affleck Deserves More Respect - Because we had a discussion about this, and I want to make sure to revisit themes of the site so when someone writes the book about WCG, they can say "Who was it who brought the Affleck to it." and everyone will say, "Kev"

And now exclusive footage of how Pat Mannelly trains: