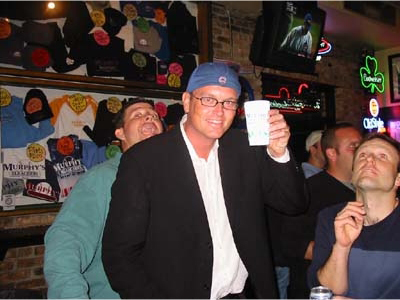 I'm going to post pond my final match up post series until tomorrow to address a issue I have with what Scott Van Pelt has said about Jay Cutler on his show today.

SVP: Cutler to me is the biggest conundrum in the NFL. There are people out there that talk about him like he's a elite Quarterback and I don't know what their are watching.

Ryen: Anyone that's not a Bears fan

SVP: I don't know, he's going to be better than Grossman, Was he?

Ryen: You really would hope so

SVP: But was the Bears better? No!!

Ryen: Yeah, but their defense wasn't as close as being good when Rex was playing.

If Cutler is a classic not my fault guy Pelt, you are a classic I can't think for myself guy; I can't believe we are a year removed from the Cutler trade and he still gets this unfair rap. Ok Scott, I agree with you that he's not an elite QB even in Denver (I hear many Bears fans say that he's a franchise QB, not elite) but not once have I ever saw Cutler as an "It's not my fault guy" even in Denver he wasn't that guy. You have to believe that Van Pelt doesn't watch a lot of Bears games, but instead go off what other media reports say. Despite the evidence that is out there that he's not that type of guy.

And there are many more that Van Pelt or his assistant can take the time to google, yahoo search, and hell bing.com to get his facts straight. This is the type of lazy journalism that gets under my skin. If Cutler was such a "it's not my fault guy" don't you think he would have lobby for the receivers that were available this off-season (Brandon Marshall, Terrell Owens, Antonio Bryant, Vincent Jackson)? Can you blame him for a having a bitter beer face where if he is not taking a sack, he is either running for his life or laying on his back checking out the solar system? No QB is going to go back to the sidelines with a chipper attitude after getting knocked to the ground by 300 pound defensive linemen. No QB is going to go back to the sideline happy go lucky, after throwing an interception. I'm not going to address the Cutler might not be that much better than Grossman comment because that was obviously one of his many lame attempts at a joke (he's notoriously known for his lame sense of humor to disguise his little knowledge of sports). Van Pelt is just one of the many examples of why ESPN is a problem for sports journalism in this world.