Taking a Look in the Bears History Book: Bill George

Share All sharing options for: Taking a Look in the Bears History Book: Bill George

Our Bear this week is from the famed 50s/60s defense. He was a true Monster of the Midway, and thanks to a request from kokobear, he's the next player on my TLBHB series! :] He is also an apt choice for today's TLBHB because of this site's recent buzz about another middle linebacker's ability to stand up to his peers and predecessors in the Hall.

I feel that chicagobears.com introduces this bear very appropriately:

During most of these years, the Bears' defensive wheelhorse was middle linebacker Bill George, a 6-2, 230-pound Wake Forest product who stepped into a new position evolving in pro football in the early 50s and who did the job so well that few have ever matched his proficiency.

Take a look with me after the jump to find out more about this outstanding Bear!

Bill George was born October 27, 1929 in Waynesburg, Pennsylvania, (a town near Pittsburgh) and coming out of high school, he had mostly wrestling scholarship offers but turned them down to play football at Wake Forest University. He later became an All-American tackle i n college .

In 1951, the 6'2, 230-pound tackle was a second round draft pick (#23) by the Chicago Bears. When he showed up for practice in 1952, he was put at the middle guard position because a lot of teams were using a 5 man defensive front. In 1954, he made a play that changed the position drastically. I like chicagobears.com's explanation of it the best:

In his middle guard spot, George's primary duty on passing situations was to bump the center from a tree-point stance [sic] and then drop back. This particular day, the Philadelphia quarterback was completing a lot of short passes just over George's head.

George remarked to George Connor, the Bears' defensive captain and left side linebacker: "Hell, I could break up those passes if I didn't have to hit that offensive center first."

"What are you hitting him for, then?" Connor shot back. "Why don't you go for the ball?"

The first time Bill tried that maneuver, the surprised quarterback's pass hit him in the stomach. The next time, Bill had his first pro interception, the first of 18 he would get in his career. It wasn't long before most pro teams were trying the same maneuver.

Within three years, even the wire services had dropped the middle guard position and added a third linebacker spot on all pro teams.

In regards to this story, Howstuffworks.com says:

Bill George's football career, with apologies to Neil Armstrong, might be summed up as "one tiny step backward for a middle guard, one giant leap forward for pro football defense."

It helped George that he was able to be under the "revered football tactician," Clark Shaughnessy. It's also said that Bill was an ideal and astute pupil to the teacher and planned Shaughnessy-type plays before lessons. After learning defensive strategy from the master, he took over signal calling responsibilities after Connor retired in 1955. How long did he hold this job? A decade. Shaughnessy had this to say about his devout pupil:

"He is a rare physical specimen both from the standpoint of power and agility. He's absolutely fearless on the field. He has a brilliant mind, an ability to size up a situation quickly and react to it, and also the ability to retain the complicated details of his job."

He was in the NFL for 15 years. It's not for sure whether he was the first to regularly play the middle linebacker position, but it's no question that he brought innovation and quality to the new position. He is also credited for ending the shotgun formation used by the 49ers in the early 60's.

"You've got to put constant pressure on the good quarterbacks," George insisted. "One time, we went into a tree-man [sic]  line with eight players in the secondary to face Johnny Unitas and he still picked us to pieces. You just can't let the good quarterbacks get set." 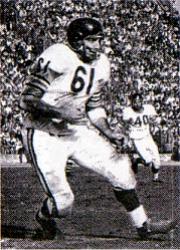 I know I've been quoting chicagobears.com quite often, but they just tell some of these stories so much better than I can! Like this one:

The rugged Pennsylvanian was also involved in many a controversy over his defensive calls that were timed to coincide with the cadence of the enemy quarterback. A game against Los Angeles in 1960 proved to be a particularly bitter episode.

"The Rams were going on a quick count and any Bear who suspected this was supposed to yell: "Backs set!", George later explained. "Actually, there were a lot of people on our team yelling and the Rams could have changed everything simply by changing their count."

But George was already a villain in the eyes of the Rams fans because of another "incident" a few years earlier when coach George Halas installed a radio receiver in Bill's helmet and "broadcast" defensive instructions to his middle linebacker direct from the bench. NFL Commissioner Bert Bell quickly declared the procedure illegal but the villain's reputation stuck.

Injuries then began to plague the NFL star. He re-signed with the Bears in 1964. After the pre-game ceremony on November 1st, the game began and a few minutes into it, George suffered severe knee damage and missed the last 6 games of the season. This was the first time George had missed a game because of a football injury.

Bill's playing time was cut to 2 games in 1965 because of more injuries and the coming of Dick Butkus. Before the 1966 season, George asked for his release and it was granted. He was quickly picked up by Los Angeles and played all 14 games for the Rams during the 1966 season.

George had 18 career interceptions, recovered 19 fumbles, and in 1954 he scored 25 points on 13 PATs and four field goals.

After retiring, Bill returned to Chicago and stayed close to his former team. When Gibron took over the head job, he was the first assistant hired in 1972.

In 1974, George was elected to the Pro Football Hall of Fame. "It's a little embarrassing but I’m thrilled to death," he said modestly. He was the 14th longest-tenured Bear to be honored and played 14 years for the Bears. The Bears later retired his number, 61. Sports Illustrated columnist Rick Reilly chose George for number 61 in a 1989 article where he chose the best athletes ever to wear each uniform number from 0 to 99. He also called him, "the meanest Bear ever." As we all know, this is no small compliment considering our team's terrifying reputation and long history! The Sporting News' list of 100 Greatest Football Players had George as #49 in 1999. Two months ago The Bleacher Report named Bill #10 on the Top 50 Bears of All Time. 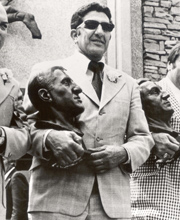 "Bill George was the first great middle linebacker," former Bears coach, Abe Gibron, said at the time of Bill's Hall of Fame election. " He brought all the romance and charisma to the position. He was like having Clark Shaughnessy on the field. He called all the plays and had a special knack for it."

Bill George was killed in a three-car automobile accident on September 30, 1982. He was 51 years old. Another driver was also killed in the incident. George was driving eastbound on Illinois 72 when a tractor-trailer struck his van at an intersection. Apparently the football retiree did not stop at a stop sign before completing the turn at the intersection. He was taken to Swedish American Hospital in Rockford, Illinois, where he was pronounced dead. A tragic end to an icon's life.

Want to read Bill's enshrinement speech? Check this out.

Plus, you can find stats here and here!

Any other players you'd like to see on Taking A Look in the Bears History Book? Send me a comment or email along with your screen name and let me know! Any ideas and suggestions are appreciated!