The Chicago Bears Have an Achilles Heel

Share All sharing options for: The Chicago Bears Have an Achilles Heel

Well actually, like the legendary Achilles himself, they have two.  But one’s a bit bigger than the other.  More vulnerable to the arrows of the NFL historians, if you will.  But before this metaphor runs into its own rant let me say that the Chicago Bears have one of the more storied franchises in the NFL.  As we induct new members to the Hall [including the omnipotent Jerry Rice and the poser (poser in that he didn't truly "earn" the rushing record, but more on that in a future rant) Emmitt Smith, I started looking at the Hall in general.  We lead the league in members in the Hall of Fame and boast more wins than any other franchise.  As I looked through the sheer numbers of those HOF members, two things jumped out.  Well, quite a bit more than two, but more on that after the jump.

First off Bears fans, hold your heads with pride.  The Bears are an absolute powerhouse when it comes to Hall of Famers.  The numbers I have get a little fuzzy because many of our enshrined members played in the pre-modern era when most people played multiple positions and not every position we have today even existed.  That said, we have 2 QB’s in the Hall, an impressive 6 HB/FB’s, numerous defensive and offensive linemen and even a coach.  When you consider there are 19 "linebackers" in the Hall and 5 of them are Bears you could make the argument we defined the position. (As HoneyBear eloquently presented earlier this week).  Maybe we still do but I’m tiring of that argument (Brian Urlacher will be HOF worthy, mark my words) and I’ll let that one rest for now.  As a matter of fact, you could make the argument that the Bears have at least one person in the top 10 all time at every position in the NFL.  Every position except for two. 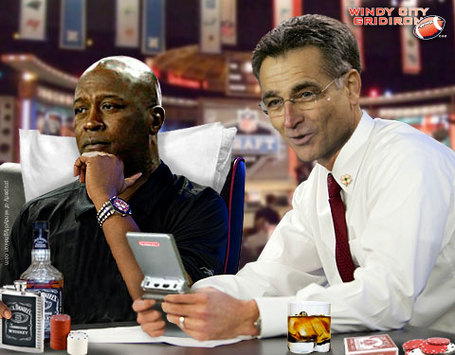 Defensive Backs:  We’ve had our share.  We’ve even had some pretty good ones.  I think of the recently departed Mike Brown and I feel no small measure of pride.  Doug Plank (he of the 46 defense hallowed be thy name) is still one of my all time favorite Bears. But for the oldest franchise in the NFL you’d think we’d have a little more representation in the Hall.  We are noticeably lacking.  However we have had some fine players to hang our collective hats on and defense usually shines bright in the windy city so this is that tiny achilles heel on our body. The one entrenched in some decent armor.   The next one stuns me a bit.  It's gushing blood.

Wide Receiver:  We’ve had practically no one.  Our all time receiving records are hardly eye popping.  Harlon Hill comes closest to greatness by winning Rookie of the Year and NFL MVP as he played from 1954-1961.  Bill Hewitt technically was a receiver.  He amassed nearly 1000 yards and 13 touchdowns from 1932 to 1936.  Not bad during a time when the forward pass was seen as a sign of weakness.  You could make an argument that if it weren't for WWII, Ken Kavanaugh may have made the Hall.  He is the career touchdown reception leader with 50.  He is also tied for the season high (with Dick Gordon, you know Dick Gordon) with 13 TDs.  We could look to our career yardage leader Johnny Morris.  With 5059 yards over 10 years he also amassed 31 touchdowns (A really good season for Payton Manning) including a 1200 yd season with 10 touchdowns.  Pretty rock solid numbers.   Willie Gault gave us some exciting plays during our Super Bowl run.  I also remember the mid 90’s when Curtis Conway and Jeff Graham lit up the field.  For a season it was great.  For a season.

Now I know I’m probably forgetting some decent receivers but I kept looking and looking.  Who do we have to hang our hat on as Bear fans?  What great wide receiver can we all point to and say,  "See.  Look at ________’s career.  He was fantastic!"  In more than the last quarter of a century we’ve had just one receiver reach the pro bowl. O-N-E.  We don't have a career receiving yardage leader in the top 50 all time unless you count Muhsin Muhammad as a career Bear.  It's not even close.  I said it earlier, we are one of the NFL’s most storied franchises and what do we have to show for it at wide receiver?  Very little. It’s baffling.

I realize we come from a historically good running team predicated on solid defense and a ball control mentality but seriously, we can’t get a great receiver?  We’ve even highly invested in the position on more than one occasion in our recent history.  Anyone want to discuss where David Terrell ranks in the pantheon of wide outs? How did Mark Bradley work out?  How about Bernard Berrian, Marty Booker (THE pro bowler) or Justin Gage who went on to have decent NFL careers elsewhere (although I still think Minnesota waaaaay over paid).  Hell, look at Minnesota.  Randy Moss.  Now its Percy Harvin and oh yeah, that Sidney Rice guy looks pretty solid.

Many will say we've never had a great quarterback and that is, generally speaking, a true statement.  But we have had above average ones.  As I stated earlier, we have QB's in the Hall of Fame.  They had to throw to someone.  Jim McMahon was pretty decent and Jim Harbaugh went on to play darn good football after he left the Bears. (He was runner up for NFL MVP in 1995 and is in the Colts ring of honor)  Maybe he wasn't great for the Bears because he had no one to throw to.   How many other average QB's have we had who may have been better given something to work with?  And don't just look at recent history.  This is the oldest franchise in the NFL.

I know we have some young promise on our team right now and I really hope we break this miserable chain.  I think this could be the year that Johnny Knox and the Devins put this to rest.  I really do. But what I want to know is how has this ever come to pass in the first place?  Why have we been so poor at that position?   We have a lot of great NFL minds here at WCG, so what do you people think?  What explains the lack of talent, or ability to develop it at that position?  Any ideas?  Your thoughts  in general?  I’ll hang up and listen for my answer.  Thanks.