Taking a Look in the Bears History Book: Kevin Butler

Share All sharing options for: Taking a Look in the Bears History Book: Kevin Butler

Today's TLBHB player is from a more recent era than most of the players I take a look at. However, you guys choose 'em, and I'll write about 'em! This fellow is well-known and adored around WCG, but a helmet tip to gwl17 for choosing this well-remembered player with a seemingly childish nickname.

Kevin Gregory "Butthead"  Butler was born July 24, 1962 in Savannah, Georgia. On Redan High School's football team, Butler was a defensive back and kicker and an all-state selection in soccer. He would have likely been a position player in college had he not suffered a knee injury in the first game of his senior year at Redan.

"I was upset that I couldn't be a position player," he recalls, "but it became a blessing, allowing me to concentrate on just being a kicker for the first time."

Take this snippet about when Coach Dooley sent Butler out to kick a 60-yard field goal without even asking if he thought he could make it:

"My longest practice kick was 78 yards," Butler recalls. "It wasn't so much a matter of distance as . . . just putting it through. Coach Dooley gave me the confidence I needed as a kicker."

"Heck, any time we got past the 50, Kevin would stand right in front of me on the sidelines," Dooley recalls.

"He always wanted to kick the game-winner. What I remember most about that Clemson kick is that he could have made it from 70."

As soon as the ball left his foot, Butler knew he'd gotten enough of it. But he watched a second longer to make sure it held its line. It did, and all hell broke loose in Sanford Stadium.

"I ran to the student section," says Butler, "and then to the cheerleaders!"

"Yeah, and then you remembered I was no longer a cheerleader and you came running to me on the sidelines!" says Butler's wife, the former Cathy Clement.

Here is an excellent story with lots of great quotes, I just can't fit them all in! LINK

Plus, here's a little highlight from Butler's time at Georgia:

Butler played for the Bears from 1985-1995. He was drafted in the 1985 NFL Draft in the 4th round with the 105th pick. Even though the Bears were coming off a strong season with their kicker, Bob Thomas, GM Jerry Vainisi felt that he was by far the best pick in the 4th round and that they could afford to boost a non-need position because of their dominance.

In his 11 seasons with the Bears, he became the team's all-time leading scorer with 1,116 points, surpassing Walter Payton's old record of 750 points. Butler was also a part of the Super Bowl XX Champion 1985 team. I found this story about how Butler was so confident about the Bears going to the Super Bowl that he told his fiancee to change some very important plans.

The Bears returned to training camp in Platteville, WI for the second year in July of '85. Rookie kicker Kevin Butler's fiancee was shocked when Kevin called her shortly after camp started. "We have to change our wedding date," the kicker told his fiancee, leaving her in shock. "We're going to the Super Bowl this year, and it's on January 26th," he told her. They had selected that same date for their wedding.

During his time with the Bears, he acquired his nickname, "Butthead." 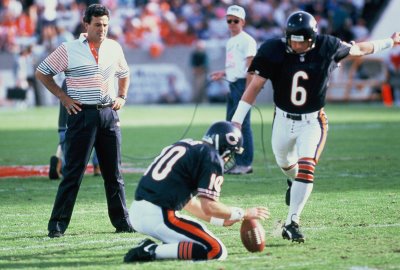 Take these quotes about Butler and how fierce he had to be with the '85 Bears:

The Bears also had a kicker from Stone Mountain, Ga., who wore a helmet with one bar and rolled-up sleeves, exposing unkicker-like biceps even in the harshest Chicago winters.

"Even the kicker had to be tough with the Bears," says the now-retired Butler, who was christened as a professional with a Super Bowl Championship ring in his rookie season in 1985. "I made 11 kickoff tackles that first year, I worked out with the guys—and everyone loved it."

In 1991, he had a rough year. There was a bitter contract dispute at hand and he received a DUI, on top of having his lowest field goal percentage (65.5%) of his career. However, he did rebound in the Wannstedt regime.

Butler had a generally strong 1995, but as usual the team brought in training camp competition in Miami’s Carlos Huerta.  Bears fans were shocked when Wannstedt made the decision to cut Butler and retain Huerta following the final preseason game.  "Sometimes to get ahead you don’t make the easy decision," Wannstedt said about Butler’s firing.  The joke would be on the coach, however, when Huerta only lasted 4 games and converted only 4 of 7 attempts.

After that somewhat controversial release from the Bears, Kevin played for the Arizona Cardinals from 1996-1997. Butler finished his 13 NFL seasons with 265 of 361 field goals (73%) and 413 of 426 extra point attempts, giving him a total of 1,208 points! He became the Bears' all-time leading scorer and is ranked 30th all-time in scoring in NFL history 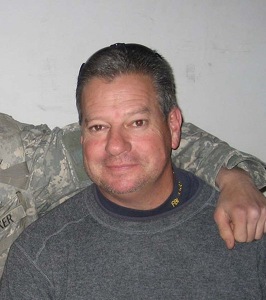 Kevin Butler is married to Cathy Butler. They have three children together: Katie Scarlett (who goes by Scarlett), Drew, and Savannah Butler. Scarlett goes to UGA and Drew plays football for UGA and is the starting punter. He is was leading the nation in punting and had continued averaging 49.7 yards per punt (and was leading the nation in net average at 44.5 yards per punt) at one time. Savannah is going to Marymount Manhattan and is a talented ballet dancer. Here's a blog post from Coach Zauner (the Bears and Butler's previous kicking consultant) about Kevin and his son coming for some one-on-one punting lessons.

Kevin has written a new book entitled, From Butler to Cutler, the story of #6 and the Chicago Bears. He also still maintains his relationship with his alma mater, the University of Georgia, by co-hosting the Budweiser Fifth Quarter Show on 106.1 WNGC and 960 WRFC in Athens.

And a special addition for rdent4hof: Kevin Butler speaks some love about Richard Dent! LINK