Five Questions With: Blogging the Boys

Share All sharing options for: Five Questions With: Blogging the Boys 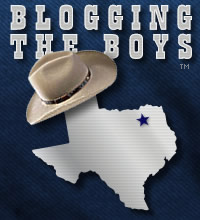 Despite other big games that might be played this week in the NFL, Sunday's matchup between the Bears and the Cowboys may prove to be one of the more exciting contests in Week 2 of the regular season.  Sure, it's the home-opener for the Cowboys, who will be looking to shift the focus from their Week 1 loss against the Redskins, but more than anything, it will be an opportunity for both the Bears and the Cowboys to show what type of adjustments they've both made since an opening week riddled with mistakes.

A big thank you goes out to Dave Halprin, the Batman of SBN's Blogging the Boys, for taking the time to answer our questions this week.

1- With a game under your belt to knock off the rust, what areas of the Cowboys would you say is your biggest strength(s) and weakeness(es)?

BtB: The biggest strength has to be the defensive play. The Cowboys defense was very stingy last year, especially against the run. They held Washington to 6 offensive points in Week 1 and made a nice stand in the redzone to keep the game close. DeMarcus Ware and Jay Ratliff are standouts in the front seven, and we have a trio of talented CBs in Terence Newman, Mike Jenkins and Orlando Scandrick. Also, the offensive skills positions are pretty good and deep.

The biggest weakness right now is the offensive line. We had to play the Redskins game without starting LG Kyle Kosier and starting RT Marc Colombo. Colombo's replacement, Alex Barron, struggled throughout the game and wiped out the potential game-winning TD. The good news for Cowboys fans is Colombo and Kosier are practicing this week and there's a good likelihood they'll play.

2- Overall, how much faith does the fanbase have in the ownership/ management/ coaching of your team?  What are the expectations right now, and moving forward?

BtB: The expectations are high, the talent on this team should put them in contention for the Super Bowl. With the Super Bowl being played in Cowboys Stadium this year, there's extra-pressure to get there. The fan's confidence in the ownership is strong. Jerry Jones does everything he can to provide us with a winner, he makes mistakes along the way, but not for lack of trying. The coaching situation is a little more split. Wade Phillips has earned his stripes as a defensive coordinator, but his head coaching skills are still up for debate. And there's a lot of discontent over Jason Garrett's play-calling recently. Of course, the opinions can change, just give us a win.

3- We know the Cowboys have some great talent on both sides of the ball... what about someone flying under the radar that could really make a positive impact on the season?

BtB: On defense, we're waiting for OLB Anthony Spencer to break through. He's shown a lot of potential along the way, but only towards the end of last year did his production start matching the potential. We hope he'll  put up numbers this year opposite DeMarcus Ware and become a household name.

4- What will be some key matchups on the field, personnel-wise, to pay attention to this weekend?

BtB: I think DeMarcus Ware vs. Chris WIlliams will be one. Ware had an OK game last week but not the dominant performance we've come to expect from him. We'll need to create pressure to disrupt Martz's offense, and Ware should be able to do that. Also, Anthony Spencer on the other side will be one to watch. On the flip-side of that, young but talented LT Doug Free will have his hands full with Julius Peppers. Free is a great athlete with excellent feet, we'll see how well he deals with Peppers.

5- What is so polarizing about the Cowboys to have made them one of the most popular pro sports teams on the globe?  You constantly see their fanbase in every city across the country, and have for decades been known as America's Team.  Why are they so popular?

BtB: Good question, and one that's hard to answer. I think they are so popular because they had a lot of success when the NFL was just coming of age in the 70s and starting to become one of America's favorite sports. That era on TV was a good time for Dallas, so a whole generation of fans grew up with them, and now have passed it on to their kids. The Cowboys have also been very good at marketing the team and its stars, plus the cheerleaders didn't hurt. Jerry Jones has carried on that marketing tradition as a master showman. But, this is also part of the reason other fans hate the Cowboys so much; they've had a lot of success, they come across as brash and arrogant sometimes, and they are constantly in the media, etc. Other fans have to get sick of that after a while.

Thanks again to Dave for taking the time to chat with us... you da man!  Make sure to check out Blogging the Boys for their version of this post.