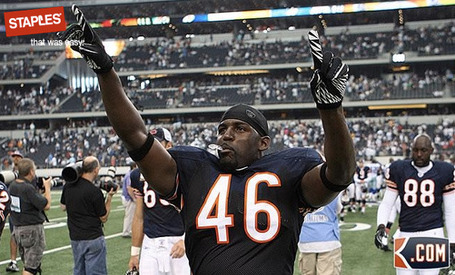 Man, we won a tough game, yesterday! We were in hostile territory, but we fought hard and pulled it out. I don’t think anyone had us picked to win, as we were 8 1/2 point underdogs. So for us to be able to go down to the Big D and lock down a 27-20 dub to hush the naysayers makes the win THAT. MUCH. SWEETER.

The offense showed up in a big way with the 27 points they put up on the board. They were always making the correct adjustments that needed to happen, so, you know, it was easy for us to stay in the game. And then what more can you say about Jay Cutler’ excellent performance? I think he had a pass rating of, like, 130, which is just stupid. The man definitely did his work.

Defensively, man, I thought we played a pretty good game, overall. I mean, we were able to shut down their running game to - well, you saw it - pretty much nothing. Sure, they got off a few passing yards, but that doesn’t really affect the way I’m gonna grade our performance, because we were able to stop Dallas when it counted, and that’s all that matters. It was plays like D.J. Moore’s two interceptions and Charles - little "Peanut" - Tillman’s forced fumble that impacted our defensive game the most.

You know we’re all excited to be 2-0, right now. I think this win really sets the stage for our upcoming Monday night game at home against Green Bay, who’s also 2-0, leaving each of us tied early in the season for the division lead. And not only is the game a tie breaker, but it’s also a big rival game, which will make the night feel absolutely electric.

The 4th Phase is gonna be rocking Soldier Field come Monday night! I’m excited and ready to go! Onto the next one, baby!