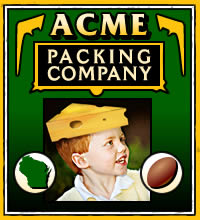 Sorry this is late folks, but better than never, right?  Big thanks to Brandon, El Presidente at Acme Packing Company, for taking the time to provide his insights.

1- With all the talk about the Packers offensive line, we have to remember that the passing game still saw success last season with Aaron Rogers running for his life.  When you look at the Bears front 7, are you concerned that the offense could struggle, or do you think Rogers is good enough to get the job done effectively enough to win?

I'm not worried about any team's pass rush at the moment, Bears included. Rodgers did well in the first half of the season, despite all the sacks (over 40 in their first 8 games). Even the player formerly known as DE Adewale Ogunleye had 2 sacks against them in their first 2009 matchup in week one. He abused awful RT Allen Barbre, who the Packers have since released. With veteran LT Chad Clifton and RT Mark Tauscher back for another season (neither is a great run blocker but slightly above average as pass blockers), combined with Rodgers quick decision making, release, and mobility, he's a hard a QB to bring down now. Clifton is gimpy after offseason knee and ankle surgeries (yes, plural) but backup rookie 1st round LT Bryan Bulaga is ready to play.

2- There is some legitimate star power on the Packers roster, but tell us about a player or two who we might not know about that could make a big impact in tonight's game.

If QB Jay Cutler starts forcing some passes, then you may hear the name of rookie 3rd SS Morgan Burnett. He's better suited to free safety, he's missed some tackles in run support, but he's got ball skills ranging from the hashmark to the sideline. He could have an INT if Cutler starts forcing the ball 20 yards downfield into double-coverage.

3- What would you say are the biggest strengths and weaknesses for the Packers offense and defense so far this season?

On offense, it's been a little surprising but Rodgers has been off in his first two games. He was nearly perfect against the Bills in the second half last week, so maybe he's finally gotten the rust off. On defense, it's the run defense. Their current ranking is poor because QB Michael Vick ran all over them in week 1, and they didn't game plan for it, they admitted they only game planned for Vick in wildcat scenarios. But as I mentioned above, rookie safety Burnett isn't as good as injured SS Atari Bigby in run support, so they are legitimately weaker in that category overall.

4- Looking at the Management and Coaching staff of the Packers, how do the fans feel about the guidance and direction of your team?

I was miffed at first about how GM Ted Thompson cleaned house after the 2004 and 2005 seasons. The Packers had won the NFC North from 2002 through 2004, so that didn't seem necessary. But his way has worked, and he's got a very good front office who has helped him avoid any free agent mistakes and continue to deliver during the draft. Mike McCarthy is a very good head coach. He lets Dom Capers run the defense, and McCarthy acts as the CEO of the offense: he calls all the plays on Sunday and is clearly in charge, but he lets his assistants design situational strategies during the week and make the adjustments from the week before. Overall, it's a solid structure.

Not exactly a matchup, sort of an anti-matchup, QB Jay Cutler against CB Charles Woodson. He's playing through an injured toe, but it hasn't bothered him much come game time. The game plan for Woodson is to put him on the opponent's top receiver (WR, TE, etc.) and eliminate him. The Eagles completed 4 passes to WR DeSean Jackson in week 1, but it took them 12 attempt to get there. They were much better once Vick finally went away from the receiver Woodson was covering. Since the Bears don't have a clear No. 1 option, Woodson might not lock onto a hot receiver until later in the game, but Cutler is going to have to recognize it and look for the receiver who might be in coverage against a linebacker or one of the rookies in the secondary.

Again, big props to Brandon for taking time out of his schedule for us!

Stay tuned for the Open Thread at 6pm CT tonight.  We'll be doing quarterly threads to help things not get so damned bogged down.