Julius Peppers, Predator: QBs, he's coming to get you.

Share All sharing options for: Julius Peppers, Predator: QBs, he's coming to get you. 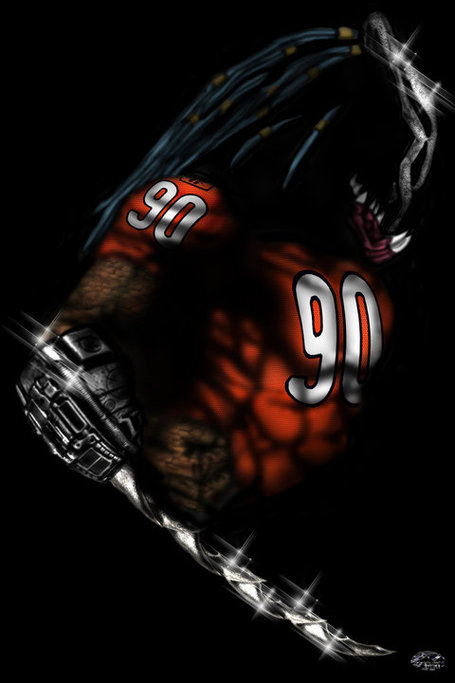 Julius Peppers has only one sack this year in the first three games.  One lonely sack.  Although, it did put Lions quarterback Matt Stafford out of the game with an injured shoulder.  Peppers brings pressure from either side, and he causes offenses to double team him.  He has to be located before every snap, and coordinators have to game plan around him every week.  But besides the on field play, more importantly he has added a much needed swagger to the Bears defensive line.  His presence has been felt.

I knew Peppers was a dominating player, but I never really watched him much in Carolina.  Sure I'd catch the occasional game here or there, and I'd see all his highlights, but to just watch him play...  to enjoy seeing him work...  He's a freak of nature.  His speed, his size, his moves, his strength, his motor.  He's the total package as a defensive end.  The perfect predatory machine.

I've never seen a defensive lineman with his size/speed combination in Chicago.  I'm old enough to have seen first hand the Bears had back in the 80's, and with all due respect to the players of that era, Peppers is better than them.  He has the pass rush speed and ability of Richard Dent, the tenacity and motor of Dan Hampton, and the strength of Steve McMichael.  I'd like someone that has seen Bears Hall Of Fame DE Doug Atkins play (another former basketball player) to compare the two.  Obviously he needs to maintain his pace for a few more years to be seriously considered for the Hall Of Fame, but he's well on his way.  That ultimate recognition may be a few years off, but he managed to pick up a Game Ball here on WCG, an equally impressive honor.

I haven't seen any of the rumored laziness or taking plays off so far from Peppers.  Even during OTAs and training camp, all reports lauded his work ethic.  So far, he's done nothing except be a model teammate.  Some critics predicted after getting his big pay day, and it was BIG, that Peppers would coast through games and/or practices.  Thus far, no coasting.

To be fair, Peppers hasn't faced a top tier offensive line yet, and he does only have that single sack.  He should have had a 2nd against Detroit, if not for the illegal contact to Stafford's helmet (rules are rules).  In fact his stat sheet (3 tackles, a forced fumble, and that sack) is almost as vacant as that of the benched Tommie Harris (1 tackle and a fumble recovery).  But he is getting consistent pressure, and there once was a wise, old, former Bears coordinator that said 'pressure is better than sacks'.  I disagree, but only to a point.  The sheer threat of Julius Peppers is giving his opposition fits.  He's causing offensive linemen to false start, he's getting held, he's making offenses slide protection to his side, and add the fact that he's equally adept on both the right and left sides and it's tough to game plan against him.

Even though no other Bear defensive lineman has stepped his game up, Peppers is still making an impact.  I can't remember an offensive line making so many mistakes due to one man.  And as fate would have it, he'll face another struggling offensive line this week against the Giants.  Their tackles are getting up there in age, and I'm sure thoughts of the Predator have been haunting their dreams all week.  If anyone else on the d-line can get in a rhythm and provide a pass rush, the Bears front 4 could be scary good.

*  Special thanks to fanatical Bears fan/artist Brandon Whitehead for the picture above.