Share All sharing options for: WCG Reports: Steve McMichael at "The Interview Show"

Hello again, and welcome to another installment of WCG Reports. After my last assignment - the "Glory Days" 25th Anniversary party of the '85 Bears - I didn't think I would be so lucky as to meet any more of the greats from that era. Thankfully, I was proven wrong. This last Friday, I had the chance to see and chat with Steve "Mongo" McMichael as part of "The Interview Show," a monthly show hosted by Chicago journalist Mark Bazer at The Hideout. Follow me below the fold for a review of the show and a conversation with one of the meanest Bears players of all time...

I was worried that I was going to miss my chance to meet Mongo - the snow that hit Chicago on Friday night kept him stuck in traffic for over three hours on his way into the city! Despite the snow, though, he made it just in time to take the stage for his interview. Mongo was by far the highlight of the show, and had the crowd in stitches as he freewheeled his way through his history with and after the Bears. He talked about being drafted by the Patriots only to be dropped by them a year later, "back when hitting free agency didn't mean you were good." Thankfully both for him and for Bears fans everywhere, there was one man who saw his potential: George Halas.

His playing style and personality fit perfectly with the Bears, and he was notorious for the ways he would intimidate the other team and get after their quarterback. One story he told was about his habit of standing at midfield during pre-game warm-ups and staring at the other team, which he was later able to ask a former opponent about - unsurprisingly, the opposing offense all thought he was crazy! Steve was more than pleased to hear that his intimidation methods were successful, as his whole "Mongo" persona was built to scare his opponents. Even when he's out of character, though, he is still a force to be reckoned with: the host literally ripped up his question cards about five minutes into the interview and pretty much let Mongo take over. 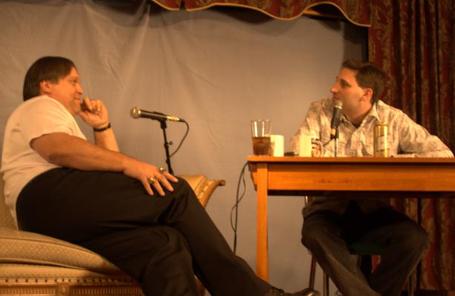 While Steve doesn't seem like the kind of person to scare easily, he did talk about the one thing he is truly afraid of: his three-year old daughter! As he said, "If the Book of Revelation said that the Antichrist was a girl, I would shave her head and look for a 666." While his daughter seems to be a chip off the McMichael block, he was happy to have a daughter instead of a son, if only so she isn't haunted by her father's sports achievements and driven to try and top them. And not to have us think the settled life had tamed him, he discussed his plan for when his daughter starts dating: since he would be old enough for the nursing home by then, he would remind these gentlemen callers that he could easily save his family the money and go to jail instead of the home!

When the Show was finally over, I got the chance to do my own interview. I introduced myself as a local sports blogger, to which Mongo just laughed a bit and said: "Blog this: the Bears are going to the f***ing Super Bowl!" I let him order his drink and got down to some actual questions. I was hoping to milk him for some good locker room gossip, but he had said during his earlier interview that "what happens in the locker room stays in the locker room" and I had no interest in being on the receiving end of a Mongo Spike.

Instead, we talked at length about the "secret" to the coaching success he and other 80s-era Bears have had as coaches. He said it wasn't so much a style of coaching as an approach to the game: the lesson of Ditka's Bears is that "dominating the game with defense" and a solid running game both "keep the other guy's offense off the field" and keeps your own team in control of the game. We wandered into talking about the most recent Bears game as an example, which he said shows that, "If you abandon the running game and go pass-crazy, what do you get? Three points." We both agreed that the Bears didn't really put in their best effort in that game, but McMichael was even more optimistic than I that the team can right the ship and go all the way to the Super Bowl. As long as they get themselves back into the classic Bears formula of run game and defense, he thinks they can make a deep run into the playoffs.

Mongo wasn't talking merely as a football expert in giving his Bears playoff prediction, as he talked about earlier in the night with some other fans. He said that not only do his two restaurants - "Mongo McMichael's" - do well on Bears Sundays, he also gets paid to appear at other bars to promote their playoff and Super Bowl events, so he mixes in a bit of personal interest into his prediction. I was still set on getting some insider info, so I asked him who (other than himself) was the meanest player on the Buddy Ryan defense. His answer surprised me a bit: Wilbur Marshall. But as he explained it, "You see two dogs on someone's lawn. The one is up at the fence barking at you, and the other is sitting back on the porch just watching you. It's the quiet one you have to worry about." So while players like Singletary and McMichael himself had reputations as having a bark with a bite to match, the players who come at you with no warning can be just as mean.

If you ever get the chance to meet Steve McMichael around town - he's out and about quite a bit between his radio job, his head coaching gig with the Chicago Slaughter, and his various restaurants - I would highly suggest you take it. He's a lot of fun to see in person and is quite approachable, at least when he's not hungry. Let's just hope that his prediction for a Bears Super Bowl win 25 years in the making comes true!