Watch for Bears use of Cover 3 against the Seahawks

Share All sharing options for: Watch for Bears use of Cover 3 against the Seahawks

The last couple of weeks I've heard some things on Chicago sports radio that caught my ear.  (I don't remember which station, nor which guest expert said it)  The expert spoke of the Bears probably being the best team in the league at disguising their coverages.  This I did not know.  Every team uses a multitude of coverages, different mixtures of zone or man, or a combination of the two.  And when you're a team that runs the Tampa 2 as their base defense, you need to give enough different looks to keep opposing quarterbacks honest.

The second thing that piqued my interest (I'm still not 100% sure, but I think it was Tim Hasselbeck that said this) was that this Bears team runs about as much Cover 3 as they do Cover 2.  This I did not know either.  I've looked at the Tampa/Cover 2 stuff Chicago has done before, but this week I'll try my best to explain the Cover 3. 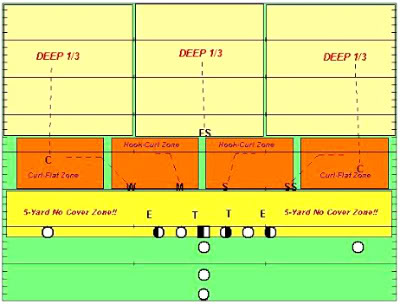 The variation above is the Cover 3 in it's most basic form as run by a base 4-3 defense.  The middle third is covered by the free safety, with the other two thirds taken by the corners.  The strong safety can play up tight in run support, then if he reads a pass it's a quick shuffle to his curl/flat zone.  The other 3 underneath zones would be manned by the three linebackers if the Bears are in base personnel.  The ease of the Bears transitioning from an eight in the box strong run defense look to the Cover 3 is a probably a big reason they run this zone as much as they do.  Matt Bowen of the Chicago Tribune and the National Football Post does an outstanding and detailed job in breaking down the Cover 3 from an eight in the box look right here.

The Bears are just as likely to run the Cover 3 from their nickle package.  This would give them some flexibility in disguising the look.  The Bears like to blitz SS Danieal Manning and nickle back D.J. Moore from time to time, so by bluffing a blitz, either would be in prime position to drop off into their curl/flat zone.

The 3 deep 4 under isn't the only variation of the Cover 3 the Bears could run.  Blitzing a defender and playing 3 deep 3 under is a possibility.  Playing 3 deep 3 under with 1 DB assigned man to man is another, and with as big a threat Seattle's Mike Williams posed last time out I could see this the Bears showing this on occasion.

Nothing the Bears will run is going to confuse the 35 year old, 12 year veteran, Matt Hasselbeck.  He's seen it all.  It's how good they can disguise what scheme they're getting into that will tell the tale when Chicago's on D. Hasselbeck may have turned back the clock against the Saints last weekend, but an angry Bears defense is capable of playing on another level.  Hasselbeck had fluid drained from his hip last week, he had a bulky wrap on his non throwing hand, and he hasn't put together a good season since 2007.  What the Bears will have to do is cause him to take that extra second to decipher the defenders drops, and if the Bears front four is playing as angry as I expect them to be, it could be a rough afternoon for the Seahawk offense.