Getting back: Super Bowl loss is Bears' motivation - Well try not to do that again. 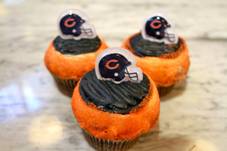 Check out these cupcakes from Crumbs, at 303 W. Madison, Chicago. They'll be available through Sunday, and if the Bears are successful, until the Super Bowl. I know someone who works there, and let me tell you--the cupcakes are AMAZING.

Special teams, Hester’s opportunities again are the X-factor - I seem to recall saying that yesterday.

Bears ought to dare Rodgers to beat them - Rosencolumn says there are other ways to get pressure on Rodgers besides hitting him.

Win Sunday would provide frozen-in-time moments - McNeil, who constantly poops on this team, says the win would be a watermark moment in history.

Chicago Bears fans are ready for another party if they beat Green Bay Packers - Let's not get ahead of ourselves.

Cover 2? Not as much as you think - Maybe, just maybe, someday everyone will realize they pull a lot of different looks.

WCG Writers in other Locations Corner

When Chicago Bears Are on Offense - Lester breaks down one side.

When the Chicago Bears Are on Defense - Then he breaks down the other.

Chicago Bears Keys to a Super Bowl XLV Appearance - Dane wrote about some stuff, too.