I figured we'd start the 2011 Free Agency outlook with what may be the absolute easiest decision on the entire list.

Going into the 2010 season, the Bears had Jay Cutler, Caleb Hanie, a questionable offensive line, and an offensive game plan that was likely to get a quarterback murdered at midfield. Mike Martz, often not fond of young players, wanted to bring in a veteran presence to help calm the storm, should something happen to the obvious starter in #6.

After looking at the players available that had something resembling experience with a Martzfense-type system, they chose the man, the myth, the legend. Todd Collins.

Collins was hesitant to join up with the Bears. He really didn't have a lot of playing experience, despite an extensive NFL career. He also seemed to sense that this was a situation where if he played, he might get hurt. Finally, he acquiesced, and was instantly slotted into the #2 slot on the depth chart, despite Hanie's presence on the roster.

Let's take a look at some of the pros and cons for the potential return of Mr. Collins:

-He's only played in 22 games in the last 8 years, so there's not a lot of game tape for him.
-He was the inspiration for this bit of hilarity: 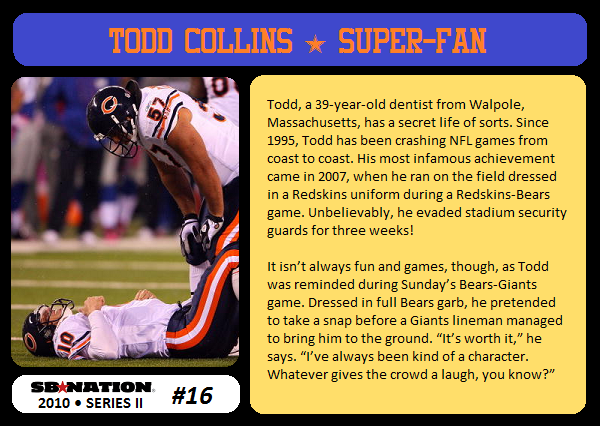 -He appears to have lost any and all mobility.
-Seems to lack fundamental arm strength.
-Doesn't seem particularly involved in the concept of playing football.
-Turned the team down once before signing.
-Threw five Interceptions in 1.5 regular season games, leading to an interception percentage of 18.5%
-2010 Quarterback Rating: 5.9

I certainly mean no disrespect to Todd Collins, as he seems like he'd be a pretty decent fellow, but the situation seems to have gotten away from him. There are exactly zero reasons for Collins to return to the Bears, from both sides of the situation. I would imagine that at this point, he's inclined to hang it up. For the Bears, they may have to tender a pick for their other FA quarterback Caleb Hanie, but we'll get to that very soon...

---
If you missed the full list of Chicago Bears 2011 Free Agents, check it out here.