Share All sharing options for: The Wide 9 Defense is bad news for the Mike Martz Offense

I'm starting to believe the game has passed Mike Martz by.  I picture him as a cantankerously cranky, old stubborn, 'my way or the highway' guy now.  He's doing it his way to show all those young whippersnappers he can do it.  His refusal to adapt to his talent borders on stupidity.  His constant 7 step drops is borderline homicidal.  I think he's really trying to get Jay Cutler killed.  The #1 rule for being a passing team is to protect the quarterback.  If you have to keep in 6 guys to block, you keep in 6.  If you need to keep in 7, you keep in 7.  If you can only release 2 receivers into the play then that's all you do. In the Monday Night game you heard the commentators refer to the Wide 9 Defense of the Detroit Lions.  It's a defense that tries to shrink the field by aligning the defensive ends far outside in the 9 technique (see the technique diagram above) forcing you to run inside where the linebackers can make plays.  In many passing situations the DEs are even further out than the actual 9 tech spot.  They are cocked and ready to explode to simply speed rush around the tackles.  If Mike Martz is calling 7 step drops and he refuses to chip the DEs with a back or TE, the play is doomed to failure.  Unless you have a really, really good offensive tackle, it's nearly impossible to block.  The Bears tackles have shown they struggle to cut off the DE in a wide 9 tech on 5 step drops too, so in that aspect Martz is handcuffed with what he does, but there is no excuse for not chipping or by keeping someone in to help.  Of course if Martz would just play to Cutler's strengths and get him outside the pocket that would help too. 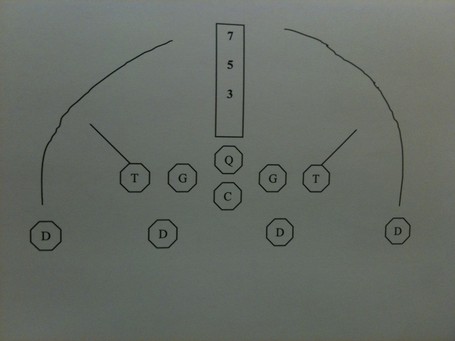 That sorry excuse for a diagram above is my feeble attempt at showing the wide 9 look.  The angle an offensive tackle has to take to cut off the speed rush is tougher the deeper the drop for the QB is.  It's just a real tough block for a 300 pound man to make against a fast DE.  And the Lions were bringing in fast athletic DEs all game.  Add in the crowd noise that wasn't even allowing the Chicago tackles to hear the snap count, and now they're trying to block a player with a head start.  At one point in the 4th quarter during a sequence where Martz called four consecutive 7 step drops MNF color man Jon Gruden commented on how tough it is for the Bears tackles to block against the Lions front without getting a chip on the DEs.  What the chip does is, besides slowing down the speed rusher, is it allows the tackle to get a better angle for his block, and it may allow him to get his hands on a redirected defender.

And speaking of the 7 step drops, what I saw on film was thirteen called 7 step drops by Mike Martz.  I counted 44 pass plays while re-watching the game, and seeing as how Cutler had 38 pass attempts, 2 scramble runs, and 3 sacks, I know at least 1 play I counted was negated by penalty.  I also counted just three 3 step drops the entire game.  Just to clarify, those three hot read quick hitters were not counted as 3 step drop passes.  Those were hot reads by Jay and his receiver based on the defense's look.  I also don't count any of the shotgun pass plays as 3 step drops.  I'll get a little coachy in the next paragraph, so feel free to skip ahead if that's not your thing...

Taking a snap from shotgun takes the place of a 3 step drop.  For example if a basic slant pass (with the QB under center) calls for the QB to take 3 drop back steps then throw, that same pass from the shotgun will be a catch, set, and throw.  If the route combination by the receivers usually requires a 7 step drop from the QB when under center, then that same play from shotgun will be snap the ball, catch, drop about 3 or 4 steps, then throw.  Some offensive schemes in theory has all pass plays designed so that the QB and the receivers are in time together.  If a 5 step drop is called, he's to have his decision made where to throw on the 5th step, plant and throw.  The West Coast offense takes this principle and applies it to every pass play.  In the Martz offense, some of the plays take a little longer to develop so you may see Cutler waiting at the top of his drop before he uncorks a pass to a spot.

Re-watching the game I noticed something else.  Martz did a good job with the runs he was calling.  Yeah I said it.  Matt Forte had a good game running the ball.  Traps and draws are necessary against the Lions defense.  I still think more 3 steps drops should have been called, and he should have had backs or tight ends chip more.  They should have chipped or stayed in to help block with a late release into the flat or hook over the middle.  I think he should have gone with a little more play-action, my tabulations recorded 5 such plays, and of course get Jay out of the pocket moving away from the rush.