Share All sharing options for: Five Questions With: Bucs Nation 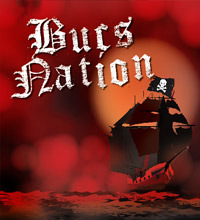 As we near the Bears-Bucs game in London this Sunday, I had the privilege of doing a quick Q/A exchange with the lead editor over at Bucs Nation, SB Nations' Tampa Bay Buccaneers blog. Big thanks goes out to Sander for taking the time to field our questions.

1- The Bucs are sitting pretty confidently at 4-2 right now, with two of those wins being against the Falcons and Saints. Out of the two losses, one of them was only by one score against the Lions, but one of them really stands out - The 48-3 beat-down courtesy of the 49ers. Which Bucs team is closer to reality... The 4-2, division-leading Bucs, or the inconsistent, potential to have a meltdown Bucs?

Sander- I'd say the division-leading Bucs are closer to reality. There were some unique issues with that 48-3 loss that do explain some of it: the Bucs were coming off a Monday Night game, and they had to travel to the West Coast. That meant losing basically two days of preparation, which really hurt the team. The team certainly is still inconsistent, though, as it has a lot of young players who are still learning to play the game. But I think you're seeing a lot of things come together, and you're seeing the team play better and better.

2- Malcolm Glazer, infamous owner of the Bucs and the soccer club Manchester United... General Manager Mark Dominik, who cleaned house in early 2009, and orchestrated one of the greatest turnarounds in NFL history in 2010 - Tell us about the Bucs front office, and how comfortable the fanbase is with the current direction of the team.

Sander- Malcolm Glazer really hasn't been involved in the team since the Super Bowl, as his sons run the team on a day-to-day basis. But for the most part they are hands-off owners who let the football people do their thing. Those football people headed by Mark Dominik clearly have a vision for this team: they want to build through the draft, largely ignoring free agency, and they aren't afraid to throw young players into the fire. That does annoy some fans, though, who want to see the Bucs spend in free agency. But as long as the team keeps winning most of the fans are happy, and that sure seems to be the case right now.

3- Who are the rookies and sophomores who are likely to make the biggest contribution for the Bucs in 2011?

Sander- The Bucs are already starting two rookies, so that's an easy question to answer. Adrian Clayborn is starting at right defensive end and has done pretty well so far. He's notched two sacks and many more hurries and quarterback hits. He's a violent player who seems to be getting better each week.

Mason Foster is starting at middle linebacker and has done decently so far. He's mostly a run-stopper in the middle of the defense, and he's vulnerable in pass coverage, but he too seems to be improving every week.

Then there are two players who both get on the field a lot but aren't starting: TE Luke Stocker and DE Da'Quan Bowers. Stocker is the Bucs' main run-blocking tight end, but he can be effective in the passing game as well. This gives the Bucs a little more flexibility than they usually have with Kellen Winslow, who couldn't block a traffic cone if he had to. Bowers has looked pretty decent but hasn't gotten a lot of playing time because Michael Bennett is playing at a very high level right now. He does get on the field for 15-20 plays per game as the Bucs rotate their defensive linemen a lot. Last week he got some extra plays in at three-technique because Gerald McCoy was out with a high ankle sprain, you could see that this week if that's the case again.

4- There are some very well-known players on the Bucs roster (Freeman, Blount, Winslow, Barber), but what about a couple players who fly under the radar, but still make a significant impact for your team?

Sander- I just mentioned Michael Bennett, and he's been playing at a ridiculously high level right now. He starts at left defensive end and has destroyed basically every right tackle he's faced. Don't let the two sacks fool you, he's played very, very well. Another player making a significant impact is Preston Parker, who has a team-high 268 yards receiving and two touchdowns so far this year. He's a slot receiver, but he's been the Bucs' most dangerous receiver this year.

5- Dungy, Gruden, and Morris... Three pretty good coaches there in Tampa Bay over the last 15 years. How do you see Morris stacking up against his predecessors?

Sander- Raheem Morris has done well so far, but he's got a long way to go before he can match the guy who resurrected this franchise from the grave, or the guy who won a Super Bowl here. What's interesting is that they're all very different coaches. Tony Dungy was the stoic leader and a great defensive mind, while Gruden was the fiery offensive coach. Raheem Morris can be fiery and emotional, but he's also the defensive mastermind and seems very connected to his players

Bonus Question: Which QB would you prefer over the next 5-7 seasons... Jay Cutler, or Josh Freeman?

Sander- I would prefer Josh Freeman. Of course, as a fan of the Tampa Bay Buccaneers I have to say that. I actually kind of like Jay Cutler, but I also think that considering the fact that he's 28, he's probably not going to get a whole lot better than he is right now. What you see is what you get - which is a good quarterback with some obvious flaws. Josh Freeman, on the other hand, is 23 and has a long road ahead of him. He had a terrific season last year and while he hasn't been on fire this year, he's still improving. Projecting that improvement into the future, I'd certainly take Freeman over Cutler.

Thanks, Sander... Enjoy your trip to London!