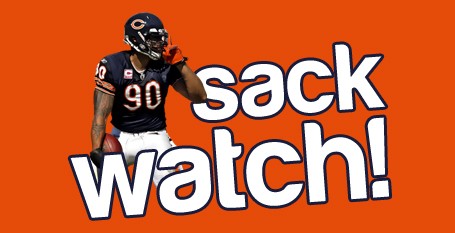 My initial plan was to take the Sackwatch in a different direction, a more positive direction, following the Bears bye week. The different logo up there should tip you off to my plan.  I wanted to breakdown a sack by the Chicago Bears this week, and I will, but after a request from long time WCG member scespy12, I'll also look at where the blame lies for all 21 sacks the Bears have given up so far.  So after the jump, I'll take a look at the 1st sack of Stephen Paea's career and then tomorrow (you can check it out right here) I'll look at where the responsibility for all 21 sacks belong.

Paea was inactive up until the week 6 Vikings game.  A few injuries across the d-line led to him being suited up for the Sunday Night prime-time match up and the rookie from Oregon State didn't wait long to make an impact.  How about a sack/safety for your first NFL action.  Not.  Bad.

The play itself was a 2nd and 8 from the Minnesota 6 1/2 yard line.  Paea was lined up as the left defensive tackle with Israel Idonije at left defensive end.  Paea was in the center guard gap and Brian Urlacher was stacked over him.  The Viking center, John Sullivan, had his attention on a potential blitz by Urlacher, and he assumed that the Minnesota right guard would take Paea, leaving him free to either help protect his right side A gap or to locate a blitzer.

On the snap Paea exploded to his right looping around to the opposite side A gap, Sullivan wasn't expecting that.  He stepped to where Paea was and couldn't recover in time.  The left guard for Minnesota was tied up with Bears DT Henry Melton so he couldn't help protect that A gap either.  Adrian Peterson was in the backfield looking to help in pass protection, but Paea bumped past him without slowing down.  Sack #1 for Paea in the books.

It was a well designed play for the Bears.  Urlacher came on a slight delayed blitz and got to Donovan McNabb immediately after Paea.  McNabb felt such pressure that he went down to save his aging backside from a hit.  Am I alone in wanting to see Paea on the field more?

Stephen Paea (vs Vikings) (via tuluvota)