Share All sharing options for: Join Lance Briggs at his Comic Book Release Party on Dec 3

Some of you might not be aware of what a huge fan of comic books Chicago's very own Lance Briggs is. The pro bowl outside linebacker isn't just a fan of comics, he has a website dedicated to that love. Lance's Comic World is a social networking site that he created to talk comics and pop culture. But his love of the genre goes even further than that... 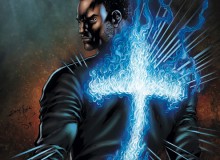 Briggs, along with comics industry veteran Phil Hester and artist Jose Luis teamed up to create "Seraph", which is a story that combines faith with action and takes a look what it means to truly believe in something. The comic was released on November 16th, and the official release party will take place tomorrow, December 3rd at Challengers Comics located at 1845 N. Western Ave. 2R in Chicago, IL 60647, starting at 1pm and lasting until about 4pm.

His comic is also entered into the 5th Annual Image Comics and Top Cow Pilot Season Competition (Fans can vote on Topcow.com) with Preliminary voting taking place from December 5th through the 18th, and you can vote as many times as you'd like. The Semifinals will run from Dec 19th - 25th with only one vote per day. And the Finals will go from Dec. 25th - 31st, also one vote per day.

"I thought of a character, a young man that had everyone he'd ever loved systematically taken away from him. You have a guy here that was brought back to life by God himself with a new set of roles to live by and some kick-ass powers," Briggs said. "Basically, he's sent out to do Heaven's dirty work and reclaim his faith."

Lance will be there meeting fans and signing copies of his new comic. They'll also be collecting comics and graphic novels for his charity Briggs4Kidsz, which is a non-profit organization that raises funds to help alleviate the emotional and financial struggles of today's poverty stricken youth. As a comic book reader myself, I think this is a great way to help kids out.