Bowen: Brady vs. The Cover 2

Share All sharing options for: Bowen: Brady vs. The Cover 2

We know what the hallmark of the Cover 2/Tampa 2 defense is: preventing the big play and force the underneath throw. However, not even the threat of decertification and league-stopping lockouts could stop Matt Bowen from looking at Tom Brady's use of a deep pass play to break the Cover 2. We'll look at the Four Verticals play that the Patriots ran on the last play of the first half. Follow me past the jump for more.

First, here's what the play looks like all mapped out: 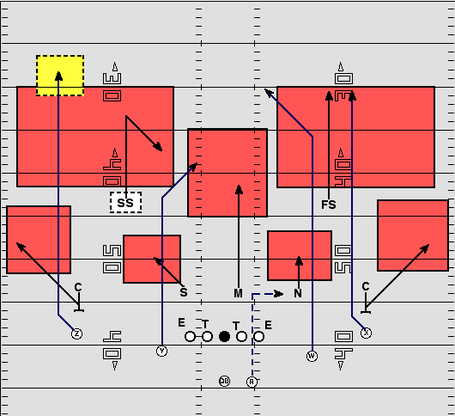 First and foremost, the play is simply designed to overload the safeties - four deep receivers, two safeties. Note the corners are supposed to jam the receivers on the outside; on this instance, Tillman (against receiver Z) let the receiver go free. The jam forces the receiver to take the inside, but because there was no jam, Branch could get to the outside easily.

Second, the inside vertical is the responsibility of the middle linebacker, Urlacher. When Tillman's receiver (Branch) is free, the strong safety has to stay over the top of both Z and Y (motioned TE). However, the play takes advantage of the overloaded safety - in Wright's case, also his inexperience. When the tight end turns inside and Brady gives a slight pump fake, Wright stayed with him instead of staying on top of the play. Branch is left completely free on the left side; simple pitch and catch.

When Branch is on the outside, when the tight end comes to the middle, the pump fake draws the safety towards that part of the field, especially because now the free safety's side is overloaded, three on two (FS and MLB). The overload works as Wright bites on the fake, and Branch makes the easy catch.

The play mostly hinges on Wright, even though Tillman let his guy go. First off, above all, stay on top of the play. It's the end of the half; the last thing you can afford to do is give up the touchdown. Watch the video on the original article and look at how far away from Branch Wright is. Even if the pass is complete, just make the tackle and go into the locker room.

Even with Wright's inexperience showing through on the play, the Four Verticals is a strong play against the Cover 2 because of its objective - attack and overload the safeties.