Myths or Legends: Jim McMahon or Where Are Jamie and Adam When You Need Them?

Share All sharing options for: Myths or Legends: Jim McMahon or Where Are Jamie and Adam When You Need Them? 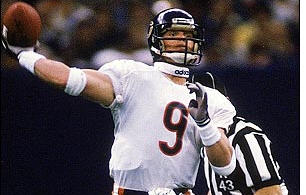 Ah, the Punky QB.  1st round selection, 5th overall, for the Chicago Bears in 1982.  Often noted as the emotional leader of the '85 Bears offense.  As the guy who took the pressure off of the rest of the team with one well placed mooning.  But was McMahon worth the pick?  Was he really one of the Best Bears Draft Picks of All-Time, as contended by Dane?  Was McMahon a Myth?  Or was he a Legend?

Follow me to the clearing at the end of the jump to read my thoughts and to espouse yours, as well!

I'm going to cut right to the chase here.  Jimmy Mac was to the '85 Bears what Trent Dilfer was to the '00 Ravens.  He was a man who lucked into being in the right place at the right time.  If you look at their careers, you get pretty similar glimpses.

"What?!" you ask?  Well, let's look at McMahon for a moment.  Yes, he had a decent year in '85. But Dilfer was decent in '00, too, and with much lesser talent surrounding him.  McMahon had Walter Payton.  If that wasn't enough, he also had a fantastic line, the fastest receiver in the game and a great return game.

Meanwhile, Dilfer had Jamal Lewis and an aging Shannon Sharpe.  That was pretty much it.  I mean, Qadry Ismail was the team's best wide receiver, for Pete's sake.  Johnathan Ogden was the only linemen that Baltimore had worth having, leading to Dilfer being sacked about once every 10 passing attempts.

Worse yet is that McMahon was a large part of the reason that the Bears never returned to the Super Bowl in the '80's.  The '86 defense was more dominant that the '85 defense was, but McMahon's frailty (and Martin's Cheap shot that aggravated the already injured shoulder) led him to miss all but the first six games, which McMahon played poorly in, throwing 5 TDs to 8 INTs and earning a 61.4 QB rating.

He had a better season in '87, though he started and ended the regular season injured.  But he returned for and choked in the playoffs, throwing 1 TD to 3 INTs with a 51.7 completion percentage.  And in '88, he once again missed significant time due to injury, but again returned for the playoffs.  And once again, he choked.  McMahon missed the "Fog Bowl" in Chicago, but returned to face Montana and the 49ers in the Championship game.  And once again, McMahon disappointed by putting up just 121 yards, an INT, a 48.2 completion percentage and a 45.3 quarterback rating.

The bottom line is that both Dilfer and McMahon road the running game and a dominant defense to Super Bowl titles.  McMahon's personality has bought him a lot of leeway, but the reality is that McMahon's career was one of injury and mediocrity.  He never did much to justify the 5th overall selection in the '82 draft and he was highly overrated.  He never won a playoff game outside of the '85 season (0-3 in Chicago in '87 and '88 and Minnesota in '93).  And he never did anything to justify either his pick or the adulation he receives.  He was in the right place at the right time, just like Trent Dilfer. 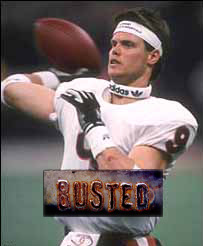 So sound off, Bears fans!  What do you think?  Was McMahon a boom?  Or was he a bust?