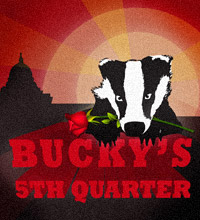 In this edition of "Five Questions With", we not only get to read the insight of someone from the SBNation Wisconsin Badgers site, Bucky's 5th Quarter, but we get someone that works for the Chicago sports radio station WSCR 670 The Score, Adam Hoge.

Adam was nice enough to give us his unique take on Bears #1 draft pick and former Badger Gabe Carimi.  In case you missed it, here's our answers to his questions from their site, and here's Adam's article about Carimi he wrote right after the Bears took the big offensive tackle in the 1st round.

Now it's on to the Five Questions...

WCG - Gabe Carimi told Pro Football Weekly that the Bears coaches have already informed him that he is to play tackle, and not guard, for the Bears.  Speculation is that he'll initially start out at right tackle with J'Marcus Webb flipping over to the left side.  What are your thoughts on this?

This is a no brainer for the Bears. I know some scouts project Carimi as a guard - and maybe that's where he would start if he was drafted by a team with a decent offensive line already - but he's a tackle for the Bears. I have my reservations about Carimi playing on the left side mainly because I was treated to watching Carimi's predecessor at Wisconsin, Joe Thomas, dominate on a whole different level in college. But while Carimi is no Joe Thomas, he's still a very good tackle and was a four-year starter in college and won the Outland Trophy just like Thomas did. He can play tackle in the NFL, just maybe on the right side.

WCG - Character has become almost as important when drafting a player as actual skill set.  As someone that's had the chance to talk with Carimi numerous times can you tell our readers a little about the kind of person he is?  Is he passionate (Bears fans love their passion), a hardworker, a leader...

I still have no idea where scouts got the idea that Carimi is arrogant. There's a huge difference between confidence and arrogance. In all the conversations I've ever had with Carimi, he has never come off as arrogant. He's just a confident kid who made it known to scouts that he thought he was the best tackle in the draft. Would you want your No. 1 draft pick to think differently? Carimi isn't necessarily a vocal leader, but he's a guy his teammates look up to on the field. He's a hardworker, but he's also a very studious football player. He's always prepared for snap counts and is very good at calling out blitzes and assignments at the line. Considering the frequent missed assignments on the Bears offensive line last year, Carimi will definitely become a leader in that sense and his teammates will come to rely on him.

WCG - A lot has been made of Carimi going up against 3 other 1st round players (Ryan Kerrigan, Adrian Clayborn, Cameron Heyward), but how did he fare in those games?

All three of those defensive ends had quiet games against Wisconsin, but if you watch the tape you'll notice that the entire Wisconsin offensive line played a part in quieting Kerrigan, Clayborn and Hayward. Don't get me wrong, Carimi played well in all three games, but Purdue, Iowa and Ohio State also moved their ends around a lot because the left side of Wisconsin's line was a fortress. Carimi did have one monster block on Clayborn though at Iowa. In a goal-line situation, Carimi locked up Clayborn and drove him all the way from the left side to the right side and pancaked him as John Clay ran in for a touchdown.

WCG - You mentioned in your article the day after the Bears drafted Carimi that he needs to get meaner, do you think working daily with Bears o-line coach Mike Tice could bring that out of him?  And what else do think he needs to improve on to transition to the NFL level?

Carimi has never had a problem with making a block, but he's not the type of guy who is going to hammer an opposing defensive end to the ground. That's why the block on Clayborn I just mentioned stood out so much. As long as you don't let the defense get to your quarterback then you are fine, but I just worry about that a little bit as he rises to the next level. He could be a little quicker out of his stance and the initial punch on a blocker could be a little stronger.

WCG - Do you think Carimi has the skills to win a starting position with the Bears as a rookie?

We have Five Questions posts lined up for all the Bears draft picks.  Stay tuned to WCG!!!

In case you missed it we already did something with California Golden Blogs about Bears 3rd round pick Chris Conte.  Here's their questions with our answers and here's our questions with their answers.