That sounds like a hell of a weekend! Any self respecting Chicago Bears fan has to get fired up by at least two of those three things up there in the title. Former Chicago Bear, Steve "Mongo" McMichael is hosting a 3 day event at his fine establishment, Mongo's On Main, in Sandwich, Illinois on May 28th, 29th and 30th. Where is Sandwich, IL you may ask? It's west of Chicago, I took the liberty of Mapquesting it for you.

Steve McMichael's Troop Stock is a three day Rock and Roll event to help raise money for military families. You can check out Mongo's website, www.Mongo76.com, for more information.

Bears Hall of Famer Dan Hampton is scheduled to be there and other Chicago Bears legends are slated to appear. They are having a Pre-Party with McMichael, The Rock Chick from Chicago radio station WLUP The Loop, and other celebrities. They are selling VIP passes that include access to a private party inside Mongo's On Main with free food and beverages and a meet and greet with most of the bands.

Some bands that are scheduled to appear are Foghat, Evolution, 7th Heaven, and Jimmie Van Zant.

Why do I have the feeling that you haven't partied until you've partied with Steve McMichael? 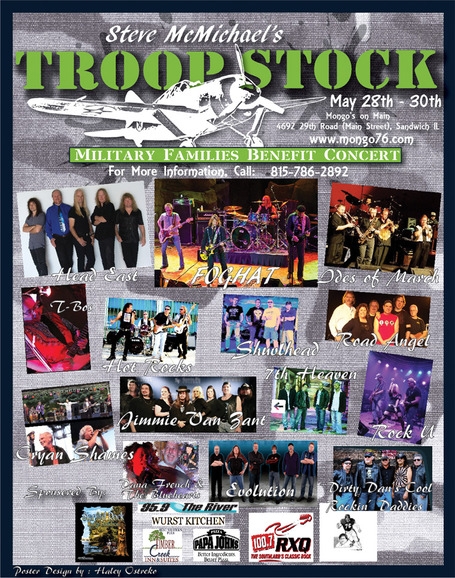