Earl Bennett could be the Bears #1 receiver in 2011

Share All sharing options for: Earl Bennett could be the Bears #1 receiver in 2011 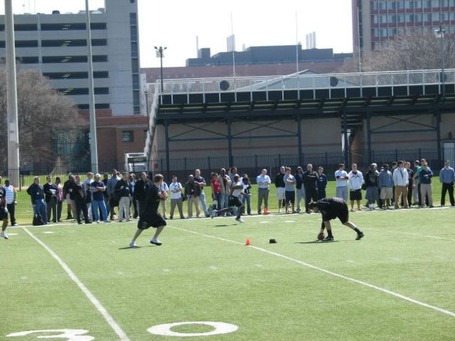 Earl Bennett and Jay Cutler have a relationship that takes them all the way back to Cutler's senior year at Vanderbilt.  In 2005 while Bennett was a freshman, he caught 79 balls for 876 yards and 9 touchdowns.  Bennett would go on to become the all time leader in receptions in the history of the SEC, and he did it in three seasons.

Their friendship was strong enough that Cutler, while a member of the Denver Broncos, went back to Bennett's pro day to help showcase his skills for NFL scouts and coaches.  *(That's Jay throwing to Earl at the Vandy pro day in the pic.)  Considering their obvious rapport, and their familiarity in year two of the Mike Martz offense;  Why can't Earl Bennett lead the Bears in receiving?

Bears fans have been clamoring for a big, physical, go up and get it, quarterback's security blanket type receiver for a few years now.  If that's your definition of a #1 wide out, then maybe 6 foot 203 pound Earl's not your guy.  But if you define a #1 receiver as a guy that will lead your team in receptions, while running good routes, that blocks his butt off in the run game, is fearless over the middle, catches everything thrown his way, and will fight for yards after the catch, then maybe Earl's the ticket.

There are only so many of those 6'3"-6'5" freakishly athletic guys on the planet.  Andre Johnson, Larry Fitzgerald, Calvin Johnson, and Marques Colston are definitely #1 receivers.  But would you consider 6 foot and under guys like Wes Welker, Santana Moss, Roddy White, and Reggie Wayne #1 wide outs?  Is a guy that catches as high a percentage of passes throw his way your number one?  I don't see why Earl Bennett can't have 80+ receptions if he's healthy.

Jay Cutler completed 60.4% of his passes in 2010.  Is it safe to assume that number will go up in '11.  The offensive line can not be as bad as it was last year.  Martz had more balance in his play calling and that balance helped keep Cutler upright more in the second half of the season.  Speaking of the Martzfense, the Bears will be that much more efficient in year two.  Receivers will be in their spots, their familiarity with the checks will be greater, and Cutler will hit on a higher percentage of passes.  Earl Bennett will have more chances to make plays, whether out of the slot or lined up outside.

Devin Hester settled into a part time receiving role.  His value to the offense seems to go up if he's not on the field all the time.  I'm not sure if he'll be starting in 2011.  Johnny Knox, in my opinion, has some trust issues he'll have to work out with Cutler.  His speed makes me believe he'll still be a starter next year, but his opportunities may drop.  These two players possibly seeing a slight cut in playing time leads me to think it'll be Bennett picking up the slack.  Then if newcomer Andy Fantuz can give the Bears anything on the outside I think that just opens things up even more for Bennett.

While he was at Vanderbilt they used to say he could "catch a greased pig", if he and Cutler can find that chemistry early in camp and keep it going through the '11 season, the phrase "Cutler to Bennett" could end up being the most prolific in Chicago history.

* Special thanks to David B. Bass of Vanderbilt University for the photo above.