SBNation's Mocking The Draft Better Than Nearly Everyone at Mocking Drafts

Share All sharing options for: SBNation's Mocking The Draft Better Than Nearly Everyone at Mocking Drafts 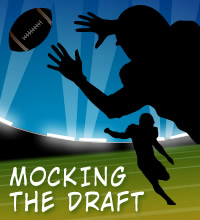 And when it comes down to Mocking the NFL Draft, there's few better than SBNation's Mocking The Draft.

There's a website called The Huddle Report that, among other things, keeps track of how Mock Drafters do from year to year. Where did Dan Kadar of MtD come in? Check after the jump to see.

Here's how The Huddle Report scores it. Every pick can be worth 1 or 3 points. 1 point if you have a player in the right round, 3 points if you get the round and the team right.

How does MtD fit in with some other big names? Here's some names to note. (Placing in Parentheses)

Not only that, but Dan has managed to crack the top ten of the "5 Year Average" board...not too shabby at all. That just goes to show--SBNation is the place to be for anything you want to do.

Show some love for Mocking the Draft in the comments, and as always, make sure to head over there so you don't look like a fool when you're talking drafts.