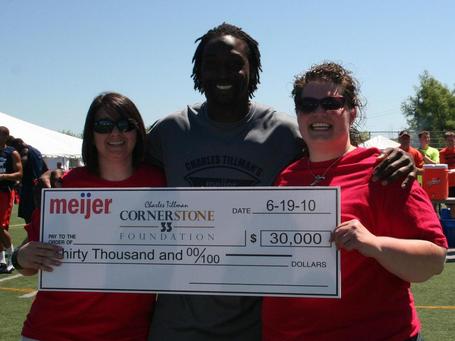 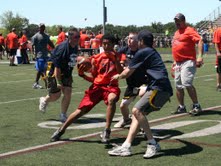 If you'd like the chance to play flag football with an NFL player as your quarterback, you need only fill out an entry form at any Chicago area Meijer location beginning May 15th through May 28th for a chance to win.  Four winners and their guests will be selected to be on the Meijer sponsored team that will compete for the flag football championship trophy.

The tournament will take place between 10am - 2pm at Lake Zurich High School, in Lake Zurich, IL at 300 Church Street.  Tickets to the day are free and can be picked up at any Chicagoland Meijer location.

As an added bonus the NFL players will be available to sign autographs and to talk to fans, and kids can visit the Cornerstone Fan Zone, which will feature a bunch of interactive games and activities. Also The Cornerstone Foundation will be giving away prizes, including an iPod Touch.

All proceeds from the event will go to the The Charles Tillman Cornerstone Foundation.

The Charles Tillman Cornerstone Foundation was founded by Chicago Bears Defensive Back Charles Tillman to benefit families in need. Initially, the Foundation's focus was on education, but shifted when Tillman's three-month old daughter Tiana was diagnosed with life-threatening cardiomyopathy in 2008, which resulted in a heart failure and a heart transplant just three months later. Today, Tiana is three years old, happy and healthy. The Foundation now provides support to those in similar circumstances, enriching lives by providing needed resources to families of children with chronically and critically ill children. The Cornerstone Foundation regularly partners with sponsors to raise money through events such as the Charles Tillman Meijer Celebrity Football Championship.