Tonight we're going to take a look back at the signature game of the 1985 Bears, their Week 3 matchup against the Vikings.  The Bears and Vikings were both 2-0, but fortune seemed to be smiling on Bud Grant's return to Minnesota. The Vikes had knocked off Super Bowl champion 49ers in a Week One stunner, putting the NFL on notice after a 3-13 season in 1984.  Also, Jim McMahon was sidelined by neck spasms and, according to Da Coach, would only see action if there was a "catastrophe at quarterback."  Things couldn't have looked better for the Vikings, but Ditka's Bears wanted to show they were still the top team in the division.  I'm guessing you already know which team will pull out the win, but follow me and announcers O.J Simpson, Joe Namath, and Frank Gifford below the fold to get the full story on this legendary game...

The stage was set for a defensive battle from the kickoff: the Vikings bobbled the ball in the end zone and could only get the ball out to the 9 yard line.  Vikings quarterback Tommy Kramer found out on the first play just how fierce the 46 pass rush could be, throwing the ball away as Bears came at him from every direction.  The Bears' rush came at Kramer too soon on third down, giving the Vikes an easy third and three.  Kramer's deep shot was off the mark and receiver Leo Lewis was barely able to break up what would have been an easy interception for Dave Duerson.  The Vikings punted the ball away, but a nice 21 yard return by Dennis McKinnon put the Bears five yards into Vikings territory.  Second-string quarterback Steve Fuller placed his early bet on the sure thing - #34 - but Walter Payton was only able to get nine yards off of two carries and a reception.  To make things worse, punter Maury Buford shanked the punt out of bounds and set the Vikings up at their own 19.

The Vikings had beat out the 49ers by having a +6 turnover ratio, but they were about to find out that their division rivals were equally as skilled at taking the ball away.  Kramer gets some time on first down and completes a pass to tight end Steve Jordan for 11 yards, but after a rush for no gain by Alfred Anderson, he looks to the air again.  Only problem is that the two Bears linesmen chasing him down kept him from seeing a lurking Leslie Frazier, who makes the interception and returns the ball to the Viking 38.  The Vikings show their version of the Bears' all-out blitz on first down, but Fuller gets off a quick pass to the even quicker Willie Gault, who hustles his way for 12 yards and a first down.  After Payton's first nice run of the game, a five yarder behind LT Jim Covert, Gault gets the call again.  He catches a well-designed screen pass and sprints all the way to the 8.  With goal to go, #34 gets the handoff but can only squeak out  two yards.  Fuller runs the option to the left, but the play is sniffed out by the defense and Fuller is taken down at the 4.  On third down, Payton tries the right side but still can't find any room.  Rookie kicker Kevin Butler trots on to make an easy 24 yard field goal and gives the Bears an early 3-0 lead.

Vikings returner Buster Rhymes makes some nice moves to bring the ball out to the 31 yard line, and Kramer comes out thinking he's found a weakness in the seemingly unstoppable Bears D.  He dodges their first-down blitz to complete an 11 yard pass to TE Steve Jordan, and hits his other tight end, Mike Jones, for two big third down conversions to move the Vikings all the way to the Bears 17.  Kramer's luck runs out, however, when he takes a hard sack from Steve McMichael on second down and then can't come up with the yardage on another pass to his tight end on third down.  The field goal comes on to sink a chip shot to tie the game.

With the first quarter almost over, Payton gets a nice 10 yard run, which sets up a play-action pass to Emery Moorehead for 17 yards.  The drive stalls, but Buford hits a nice bouncer downed by Cal Thomas at the 10 yard line.  Kramer finds another hole in the middle of the Bears defense for a 10 yard gain, but then the defensive line says enough is enough.  Dan Hampton shuts down their first down running play and then forces Kramer to ground the ball on second, setting up an impossible third and 19 and a punt to Dennis McKinnon, who returns it to the edge of Vikings territory.   Fuller has finally keyed in a hole in the Vikings defense, hitting Gault along the edge for a 19 yard gain.  Walter Payton shakes defenders off of him for another first down, but then the Vikings' defense stiffens.  They get a second down sack and force a false start to put the Bears at third and 20.  Fuller proves that he is a true Bears quarterback by throwing a bad pick into the end zone, leaving points on the field and giving the Vikes some much-needed momentum.

The turnover war keeps going, as the Vikings' stalled drive ends with a bad snap to the punter; the Bears recover the ball on the Vikings 22.  It's all Payton this time, and he moves the Bears all the way down to the 2 yard line but can't punch it in.  Butler makes another chip shot to give the Bears a slim lead, 6-3.  Buster Rhymes atones for his earlier mistake by running the ball out to the 36 on the next kickoff, and the Vikings look to air it out again.  Anthony Carter makes a nice play against an all-out blitz to put the Vikings past midfield, and two more quick completions get the Vikings into the red zone.  The Bears almost get the sack on the next two downs, but Kramer slips away on second down to complete a pass to Anthony Carter for the touchdown.  The Bears can't get anything going in the last minute of the second quarter, and the teams leave the field at halftime with the Vikings up 10-6.

The Bears start out the third quarter with a heavy dose of Willie Gault, who first returns the kickoff to the 43 and then beats one-on-one coverage for a twenty yard completion on the first play.  Matt Suhey gets a twelve yards off a nice misdirection play, but Fuller's drive is stopped cold by the Vikings' rush.  Butler goes to 3/3 on the day and brings the Bears to within one, 10-9.  The Vikings keep working the seams of the Bears zone coverage, first going to Mularkey for 10 and then hitting Buster Rhymes for a twenty two yard pass.  We've seen that route before: Kramer caught the Bears in a cover-2 and hit the gap right above the linebacker's zone.  This conversion sets up another seam route to Mike Jones, which puts the Vikings up 17-9 after the extra point.

Jim McMahon, who was shown helmet on begging Ditka to put him in, finally gets his shot.  Turns out he only needed one: #9 takes the snap, gets a great block from Walter Payton against the Vikings' all-out blitz, and hits Willie Gault with a perfect pass.  Gault shows just how fast his 40 time is as he takes it all the way into the endzone: 1 play, 70 yards, Bears 16, Vikings 17.  The Bears defense smells blood and another pass up the seam: after getting one first down, Kramer puts the ball right into the hands of Wilbur Marshall, who returns the interception to the Vikings 25.  McMahon makes it two for two when he scrambles to find Dennis McKinnon in the end zone: 1 play, 25 yards, Bears 23, Vikings 16.  The Vikings try the ground game once they get the ball back, but the drive only goes for ten yards before they kick it back to the Bears.  McMahon almost gets a touchdown turkey with a deep shot to Gault on first down, but the ball goes in and out of his hands.  Ken Margerum pulls in a first down and then Willie Gault makes up for his miss by working the middle for 15.  McMahon gets impatient with the short game, however: he beats out a Vikings blitzer to find Dennis McKinnon outrunning double coverage all the way into the end zone.  His third touchdown makes the game Bears 30, Vikings 17.  If you haven't seen this series of plays before, I highly suggest you watch the 1985 America's Game, available on Hulu. 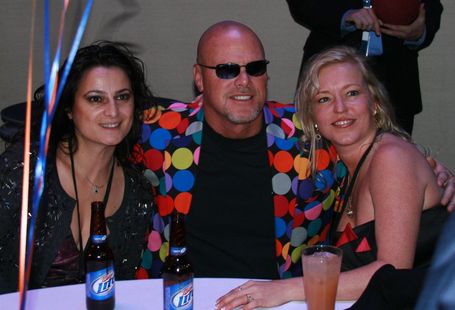 Two is never enough for the Punky QB

With the third quarter running out, the Vikings felt their chances headed in the same direction.  The again work the seam with Buster Rhymes and make their way to the Bears 30, but a batted ball by Richard Dent and shutdown coverage by Mike Richardson set up a field goal try from 47.  The snap goes right over the placeholder, however, and the Vikings are lucky to get on top of the ball at their own 44.  Dennis McKinnon picks up a quick 20 yards for the Bears, but penalties and incompletions bring Kevin Butler back out.  Unfortunately, his kick goes wide and gives Minnesota the ball back at the 20.

It's Kramer's time to take a deep shot: he completes a pass for 22 yards on first down and then finds Anthony Carter wide open for a 57 yard touchdown.  The Vikings show signs of life and bring the score to Bears 30, Vikings 24.  The air battle continues once the Bears take the field again, with Dennis McKinnon being good for 45 yards on the first play from scrimmage.  A holding call proves too much for the offense to overcome, but Butler gets back into his groove and puts three more on the board for Chicago.  Buster Rhymes makes it look the the Vikings have a shot after all by coming one shoe-string tackle short of a return touchdown, but the Bears defense are having no part of the Vikings plan.  Ron Rivera lays a vicious tackle on a Vikings receiver, knocking the ball right to Wilbur Marshall.  It's clock control football now, and Matt Suhey racks up 21 yards to put the Bears on the edge of field goal range.  Butler, however, missed a would-have-been-a-record 45 yard field goal.

The clock is closing in on three minutes remaining when the Tommy Kramer gets the ball back on his own 27.  The Bears bring the full house on first down and Otis Wilson comes up with a nice sack for a loss of 8.  The Bears move into a prevent, leaving the stick route open for Leo Lewis, who converts two first downs and puts the Vikings into scoring range.  Jim McMahon doesn't seem too worried that he's going to see the field again, as with 1:19 remaining we see him pack a king-sized chunk of dip into his lip.  We see where his confidence comes from two plays later: a pass bounces off the receiver and right into the breadbasket of Otis Wilson, who smartly goes down to put the finishing note on the signature game of the 1985 Bears.  McMahon,  who Frank Gifford calls "the man who turned this game into history," comes out in the victory formation.  Final score: Bears 33, Vikings 24.


In case you were wondering, the full 1985 season is available on DVD: it makes a good insurance policy against a shortened season!  Any games you'd like to see featured here?  Let me know in the comments.