What Should We Talk About Now Bear Fans?

Share All sharing options for: What Should We Talk About Now Bear Fans?

I was originally going to do a best of the In Draft Thread. I really was. So I spent a couple of hours sifting through the threads and pulling out your best comments.... and I realized I was about half way through the first round. There just aren't enough hours in the day to review all those great threads. I sincerely apologize. So then I thought I'd give you my draft analysis. A real in depth look at the decisions made by the Bears staff but then I realized that fine writers like Lester and Dominique had already done much better jobs than I could ever attempt. Then it dawned on me. I'm not exactly sure what I bring to the plate here at WCG. I bring you the best of the In Game Threads but it ain't exactly football season. I try to give you some insight into what I think of the Bears and I attempt to analyze team needs and moves made by the organization but that really isn't my forte. Smudgers has his cartoons, Lester and the boys do a great job breaking down the team, Steven has his weekend contributions, Honeybear makes sure we don't sound unedumacated, and Kev and Dane keep us all in our places. Even Adam is... well Adam. But then there's me. I have my thing. But there's no games for the In Game Thread. I'm all tapped out folks. And we may not have football next fall. So I'm looking for suggestions. Got any ideas? Anything we here at WCG can do a better job covering? Anything entertaining that you think I can add to the fold? I look forward to your comments, and as my "contribution" I'll leave you with the 10 things I love most about Jerry Angelo after the jump. 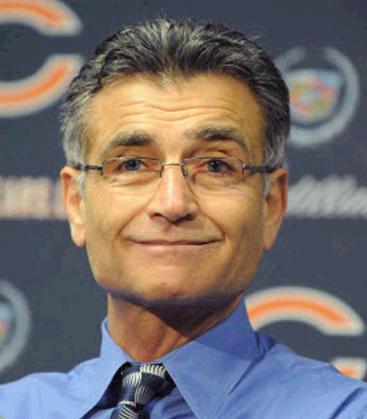 2.  His relentless scouting of football powerhouses such as Albiliene Christian, Vanderbuilt, Western Michigan, and Idaho (who doesn’t love the Vandals!).

3.  His physical stature.  He just makes me want to run up and grab him and get his pot o’ gold.

4.  The way the man knows things that no one else has knowledge of.  Things like this gem...  "The one position I think, not think, but know has been undervalued with free agency and expansion with 32 teams now is the offensive line. The colleges just aren't generating enough offensive linemen to facilitate all 32 football teams."  We (to this point) would be one of the 32 with not enough lineman.  That would explain a lot Jerry. Thanks for the clarification.

5.  The way the man handles trades and free agency flawlessly.  Look no further than our most recent draft.  And, if you’re so inclined review his handling of Warrick Holdman in his first year here.

6.  The way the man effortlessly placates Mike Martz by giving him the project he wants at quarterback while apparently insulting him with a contract extension offer.  Demonstrating that while he really wants Martz around long term he simply doesn’t want to pay for it.  The man values value.

7.  His confidence when he cut  defensive coordinator  Ron Rivera and then told us all to "Trust him."  Oh, wait that wasn’t actually Jerry.  But he fully supported the move.  He loves his head coach.  That’s got to count for something.

8.  The way he made the Bears the Tampa Bay of the Great Lakes region.  Look at our coaching staff, our defense, our front office, the fact that we’ve each got one Super Bowl victory.  The similarities are remarkable.

10.  The man played his college ball (he was a linebacker) for Bo Schembechler.  No kidding!