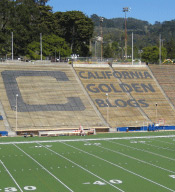 The fine folks at California Golden Blogs were kind enough to answer a few questions about former California Golden Bear and current Chicago Bear, Chris Conte.  Conte was a somewhat controversial pick among Chicago Bears fans.  After getting Gabe Carimi, a top offensive tackle prospect in the 1st round, then trading up in the 2nd for Stephen Paea, a top defensive tackle prospect, Jerry Angelo pulled the trigger on a guy I'm guessing 95% of Chicago fans hadn't even heard of.

We've since read scouting reports on him, checked out some film on him, listened to analysts inform us on his skills, but now we'll get the ultimate word on Conte's talents, and we'll get it from the guys that have seen him play on a consistent basis.

WCG:  NFL Network's Mike Mayock reported that Conte cut some weight as a linebacker to play safety, various scouting reports I've read said he was a former cornerback, and another said he played the 'rover' position for Cal.  Please set the record straight and tell our readers exactly what he did in college.

Avinash:  Big Mayock fan, but he got this one wrong. Conte was a great safety in high school, originally committed to UCLA, but converted to Cal because he desired to play cornerback. He struggled in this position for years because there were more talented cover corners in front of him (Syd'Quan Thompson's instincts were second to none, and Darian Hagan had all the physical talents for playing the sidelines), and had to play a lot of the time on slot receivers having to juggle between safety and corner. The rover position entailed that the defensive coaches weren't quite sure what to do with him. He was versatile enough to move between safety and cornerback, and he did ok at both positions.

Clancy Pendergast came in from the NFL as our new defensive coordinator and stopped the juggling of Conte, converting him to strong safety, and spent a lot of the time cleaning up the mistakes of the erratic front seven. He had some excellent games last year and did a good job being the last line of defense, particularly against teams like Oregon, Stanford and USC.

WCG:  While his senior year was his break out performance, how did he preform when given opportunities to play prior to that?  And was a special teams player in his time there?

Avinash:  He did ok at cornerback, but the talent ahead of him kept him from showcasing his skills on a game-to-game basis. He's a better tackler than coverage man, although he occasionally has his moments. He'd probably be better suited to play corner in zone coverage rather than man (Cover 2 comes to mind).  Here's my writeup on Conte pre-draft, detailing his struggles at the corner position.

The big question goes back to coverage, which is another part of the life of an NFL safety. Safeties inevitably have to line up and defend their man, and here Conte was only average. Although he wasn't much different from any Cal cornerback not named Darian Hagan or Syd'Quan Thompson, Conte would struggle reading the ball and would have to be content with staying close up to his man and hopefully disrupting his throw.  And he was only okay in zone coverage--he would misjudge the area where the quarterback would throw the ball, or get looked off/faked out out of his spot to open up a passing window. Conte will have to excel in these areas to stay on the field in the pros, and I'm just not sure whether he can do it after having so many issues during his four years here.

However, that's with regards to playing as a cornerback. As a strong safety, I believe he can excel in finishing off plays, as well as playing back in zone coverage.  I'm not sure about his special team skills.

WCG:  Since you've seen Conte play more than any of our readers, do you think he'll stay at safety, or move to corner or even linebacker as some of our readers suggest?

Avinash:  Pretty sure he's an NFL strong safety; putting him elsewhere would be counter-intuitive. He has NFL strong safety size and instinct. I don't anticipate a move to linebacker, and certainly not to corner. Give him time to develop and he'll be ready to put Greg Jennings and Adrian Peterson on the ground.

WCG:  How is Conte as a tackler?  Is he technically sound, is he a thumper?

Avinash:  72 tackles last year, including a 14 tackle game against USC when the Bears were getting rolled up--that loss could have been even worse without Conte's contributions. A good technician. He leads with his head with guys moving sideline to sideline. Goes low to the body on guys coming straight at him and drags them down. He won't always get guys down at the point of impact (and they'll get over him for an extra yard or two.), but once he gets his paws on an opposing player, they go down regardless.

OhioBear:  As a freshman in 2007, Chris Conte was involved in a memorably infamous play (if you're a Cal fan).  He absolutely run over by Jonathan Stewart of Oregon (now with Carolina Panthers).  It was one of those plays you probably don't want to see in the film room if you're the guy who got run over.  Taunts of "Hey Speed Bump" would prolly be something you'd hear.

But then he got better.  A lot of it, I think, was becoming more physically strong, adding bulk to his frame.  By the time Conte was a senior, he was a sure tackler.  He won't get you a terminator "jacked up" hit like you see out of Urlacher on a weekly basis.  But he is technically sound and will make the play that needs to be made.

WCG:  He didn't have big interceptions numbers in his career, how was he in coverage?  Was he frequently burned?

Avinash:  Perhaps, although it's hard to say. Cal did not have a great pass defense the last few season (weak play at safety in 2009, uneven play at cornerback/free safety in 2010). It's not clear to me if Conte ended up getting burned, or if guys behind him weren't making proper plays. And sometimes it's just the quarterback making a great throw--the Pac-10 has been filled with pure pocket passers the past few seasons, making it tough on Conte.

Incredible analysis fellas, thanks again to the crew at California Golden Blogs.