The Chicago Bears are Still a Football Team And Water is Still Wet.

Share All sharing options for: The Chicago Bears are Still a Football Team And Water is Still Wet.

Well another exciting week of absolutely nothing happening in football.  I can’t wait to see what won’t happen next week.  I’m on the edge of my seat thinking about the possibilities.  The CBA getting nowhere.  Big movenments not happening in negotiations.  Big name free agents not getting signed by anyone.  The blockbuster trade that won’t ever happen.  I'm spending the week watching my grass grow, the stain on the deck dry, and my daughter play Pee Wee softball and I'm not sure what's more exciting.  In the mean time here’s my ten favorite things about Brian Urlacher.

1.  The name.  Urlacher.  It actually rhymes with linebacker.  Maybe his parent would have been better off naming him "Rocko" or "Ditka" or even "Dave" but I guess Brian will work.  But the whole Urlacher thing really has a BA feel to it.  Totally cool.

2.  This guy was an absolute home run of a draft pick.  The Bears took him 9th overall and no one was sure what to do with him.  After Dick Jauron monkeyed around with him at Sam and eventually had the gall to demote him for Rosevelt Colvin (the very fact that should forever damn Dick Jauron as a head coach) Brian eventually stepped in for an injured Barry Minter and the rest became a glorious history.

3.  The guys a freaking Lobo and made the big time.  Only Hank Basket comes close.  No, not really.

4.  He was an All State wide receiver in highschool and helped his team win a championship going 14-0.  He had 12 TD receptions, 6 return TD’s and 2 rushing TD’s.  Don’t get any ideas Lovie.

5.  He played 4 positions in college and experienced success in them all.  He was a receiver, a special teams return man, a safety, and a linebacker.  And, NO DMS!!  Still don’t get any ideas Lovie.

7.  The guy’s rookie year he was very generous about signing autographs.  And even though he’s tempered his sessions somewhat, he still does a good job with young children. 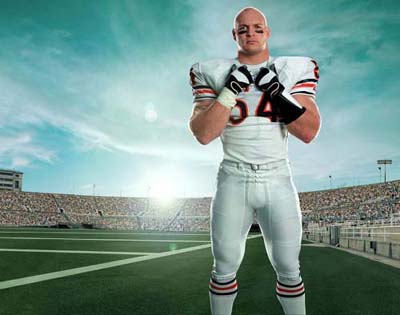 10.   And finally.  He has his own big and tall selection of clothing which you can find here.