Share All sharing options for: Interview with Sports Cards and Memorabilia Expert 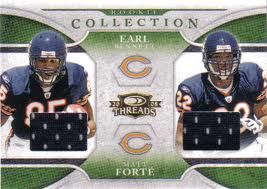 This being the off season, it's a perfect time to step outside the usual box and look for some different things to bring to our Windy City Gridiron readers.  I was always a fan of those 'cash or trash' type shows that would air on WSCR 670 in Chicago, where callers would call in and ask questions about their old baseball cards they found in the attic, or an old football they have that was signed by the 1974 Chicago Bears, or an old hockey stick signed by Denis Savard.  The collectible expert would give his quick appraisal, and the caller would either go hang up pleasantly surprised or be disappointed.

Recently I had the chance to chat with Ron Inden who is a big mover and shaker in the sports collectible and memorabilia business.  In the Chicagoland area, you could say he's kind of a big deal.  He not only deals in all sports collectibles (MLB, NBA, NFL, NHL, MMA, NASCAR, etc.), but he dabbles in entertainment collectibles as well.  Ron was nice enough to answer a few questions about the collectible business, and he's also gracious enough to answer whatever questions you may have in regards to your memorabilia.  Have a baseball signed by Ron Kittle sitting around or a Brock Forsey rookie card, and he'll give his take on it for you.  (Ron will be an vacation in the Dominican Republic for the next week, so leave your question in the comment section or send me an email and we'll be sure to get you an answer, asap.)

WCG - How long have you been involved with cards and memorabilia, and what got you started in the business?

Ron - I have been involved in the Sports Memorabillia business since I was a kid.  My dad told me to find something that interested me where I would learn about business, and interacting with people.

I, like most people, quit messing with this stuff after High School, and maybe dabbled here and there. My son had a seizure condition when he was 6, and was forced to not play any sports.  It crushed me, as sports in my opinion help mold a boy into a man.  Sports can teach many things.  So, I got him interested in sports cards. The business had grown to be quite expensive since I was a kid, so I had to re-enter the business part of it to pay for his hobby.  It sparked my interest again, and well...  the rest is history.

WCG -  Most of your business is done through eBay, can you talk a little about that?

Ron - I operate under a few different Ebay Stores, and also promote within local businesses.  I do not have a store front, as any extra overhead always scared me.

I have been an Ebay Power Seller since they first started the classification. I usually have local friends, and family assist me on posting and shipping items. I like to keep it simple.

WCG - Since we are a Bears site, are there any current Chicago Bears cards that are trending hot in the collecting world?

Ron - Bears cards are tricky.  As many fans know their draft selections are in many cases suspect.  The hobby world has picked up on that.  Most hobbyists are leery of investing in Bears rookies.

Right now, some of us (including me) have invested heavily in Johnny Knox. He looks the part of a possible big play receiver, and then his cards will soar.  In the hobby QB, RB, and WR get all the love.  If you are a lineman, you only have local love (see Joe Thomas a few years ago in WI).  Matt Forte cards are sure to soar in value if he can repeat his multi-faceted RB skills this year (if there is a this year).

WCG - Are there any older Bears cards that you would recommend as long term investments?

Ron - When it comes to older, or retired players... their value is ALL in perception unless they only have a few items.  It actually pains me to see what Walter Payton rookies go for now a days.  Gale Sayers, Piccolo, Ditka, Dent, and so on, are all very under valued as well.  When a player leaves a sport, they almost lose all credibility in the hobby from a value stand point.  When a player retires there is a small influx in value for a few weeks, then it literally falls off.  If that same player is headed to the Hall of Fame, their cards will have the same influx during the balloting, and induction... then the same downward trend follows.

WCG - As far as autographs go, what are the most valued current Chicago Bears and what are some of the more rare from historical Bears?

Ron - Current Bears value.... Well, this year many players spiked as the Bears out played (or at least won more games) than ANYONE predicted.  So, there was a nice little spike.  Had Johnny Knox reached the 1,000 yard mark... I would have a different tune. J

Urlacher, Hester, and Briggs are well sought after autos. Briggs signs the least amount of any of the name players. Generally, when you look at buying something for investment you need 2 mindsets:  Am I buying this because I love watching this player play, and I want a memory?  Or.  Am I buying this to someday re-sell to make money.

If your decision is based on the latter, buy players that do not sign much. It is easy to search any online sales sites for a players name and auto. Find players that don't have much, and you can reap the rewards.

Thanks to Ron Inden for taking some time to answer some questions, and remember if you have any questions for Ron about anything cash or trash style, drop a comment or shoot me an email and we'll get an answer out to you asap.