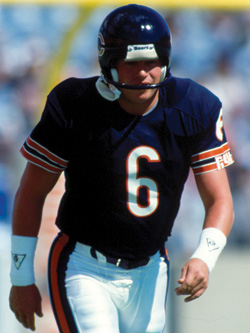 Yes, I'm giving the kickers some love! In 1985 a rookie fourth round draft pick from Georgia set the all time single season scoring record for the Chicago Bears. Kevin Butler scored 144 points, a record that still stands to this day. Butthead would go on to add another 23 points in the playoffs and Super Bowl XX.

After finishing up as one of the greatest collegiate kickers ever at the University of Georgia, the Bears were expecting big things from their rookie. His initial season is among the greatest of all time for first year players, as his 144 points scored is still a rookie record.

He scored 8 points in that Soldier Field opener against the Tampa Bay Buccaneers, and his high scoring season was underway.

In the dramatic week 3 win over the Vikings he would make 4 field goals and end up with 15 points. The following week against the Redskins he would add 6 extra points and a field goal. He had a four FG's game in an important week 6 win in San Francisco.

In the legendary 44-0 drubbing of the Cowboys he would account for 14 of those points. Then another 4 FG game in New York in a 19-6 defeat of the Jets. He would finish the season with 13 of the Bears 37 points in the Silverdome, in a 37-17 defeat of the Lions.

For more info on Kevin Butler check out HoneyBear's Taking a Look in the Bears History Book: Kevin Butler