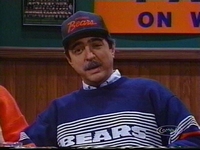 For the third straight year, we at Windy City Gridiron will be blessed with a season prediction special from the Superfans.  The Iconic Chicago legends will be taking a look at the entire upcoming season on a game by game basis and will be offering up their forecast for 2011.  We've been fortunate to have them jump on WCG from time to time to provide their always spot on analysis, and we even have a Section dedicated to their not frequent enough posts, which can be found here. 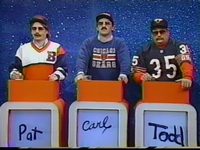 Bill - Welcome everybody the our 3rd Annual Season Prediction Special.  I'd like to give a special shout out to...
Carl - (interrupting) Do they still do "shout outs"?
Pat - I think shout outs are kind of '1994'
Todd - Why do they call it a shout out, when no one actually shouts?
Bill - May I please continue.
Carl - Are you still planning on "shouting out"?
Todd - (shouting) I'D LIKE TO GIVE A SHOUT OUT TOO!
Bill - Gentlemen please...  Perhaps the three of you can silently peruse the exceptional menu here at Ditka's whilst I continue with the introduction to our fine show?
Carl - ok
Pat - ok
Todd - (shouting) OK!!!
Bill - As I was saying...  Welcome everybody the our 3rd Annual Season Prediction Special.  I'd like to give a special shout out...  (Bill looks around nervously) ...  to Mike Ditka...
All - Da Coach!
Bill - ...for having us once again conduct our show from his fine establishment.
Pat - 100 East Chestnut Street, Chicago, Illinois
Todd - (shouting) 60611!!!
Carl - I think we can cease with the shouting Todd.
Bill - And another shout out to the superb Managers of Windy City Gridiron, Adam T and Dane Noble, for allowing us to once again grace their readership with our presence.
Pat - Who's Adam?
Bill - Not quite sure, I'm just reading from the card they gave me...  and a final shout out to Luther Wilfang for hosting our show in his usually scheduled time slot.
Carl - Um, Bill, I think you butchered his name.
Bill - I did?
Carl - Yeah, it's Luther A. Wilfang (emphasizing) Junior.
Bill - So it is.  Thanks everybody, now on to the show.
Todd - Am I gonna be able to give a shout out or not?
Bill - No.  I'm Bill Swerski, and I'm joined today as usual, by Pat Arnold, Carl Wollarski, and Todd O'Connor.
Todd - Hello...

Bill - In week one the Bears start off by hosting the Atlanta Falcons, and might I quickly say that week one will take place when week one is supposed to take place.  I think Hell would freeze over before the NFL allows any games to be missed.  Lockout, schmockout
Todd - and Rock out with my co-
Pat - (quickly interrupting) Woah, Todd what the hell are you thinking, this is a family show!
Todd - I just thought we were doing some sort of rhyming thing.
Bill - Well settle down there Notorious P.I.G., what's your prediction on the Falcons game?
Todd - (chuckles) P.I.G., is that a pork thing?
Carl - I'll take this prediction Bill, Matty Ice will be put on ice much like the Detroit QB was last year in week 1 because Peppers does it Chi-ca-go style.  Bears win 36-zip.
All - Da Bears!

Bill - Moving right along to the 2nd week and our Beloved travel to the sight of what many believe to be the site of the coronation, or should I say culmination, no, I like coronation, of the greatest team to ever play the great sport of football.  The New Orleans Superdome.  Site of the Super-asswhipping that the glorious 1985 Chicago Bears
All - Daaaaa Bears!
Bill - put upon those New England Patriots.
Carl - The only thing that would make this week 2 tilt more enjoyable, is if the Patriots would be the team the Bears were to play.
Pat - Irregardless, I think we all know what the score in New Orleans will be this week, 46 to 10 Da Bears...
All - Da Bears!

Bill - OK, I think we need to settle down and get serious now.  For the week 3 match up will see the hated Green Bay Packers traveling to Soldier Field for what should be a National Game on FOX.
Pat - And if I were to wager a guess, and if someone would get my bookie on the phone I would, I'd guess the FOX #1 team of Joe Buck and Troy Aikman will be doing the game.
Bill - Your bookie?  Pat, I think it's time we had in intervention.  Everyone knows all illegal betting is better done online these days.  It's safer, more secure, easier to place a bet, and did I mention much easier to collect your winnings.
Pat - I'm sorry, I'm just too old school to stray from my bookie.
Carl - And besides, Pat's computer has a virus from downloading gay pron.
Todd - Not that there's anything wrong with that.
Pat - How was I to know that Sausagefest 98 wasn't a documentary on 98 ways to prepare sausage.
Bill - I could see how that would be confusing, but can we get back to the prediction.
Carl - If you thought the Packers had injury problems in 2010, just wait til the Monsters of the Midway get their hands on the twenty eleven version of the green and golden football club to the north.  You want my prediction Bill.  My prediction is pain.
Pat - Well put Carl.  A moment of silence for the Packers playoff chances.
(they all look quizzically around)
All - Nah...  (they all laugh)
Carl - Bears win via a knockout.

Bill - Week 4 and the Carolina Panthers come to town.  The Panthers.  Need I say more?
All - Da Bears!

Bill - The Bears next travel to Detroit for their second NFC North match-up.  What do you say guys?
Pat - Lions fans are still quite salty over last years opening day 'was it a catch or wasn't it a catch' game, so I think this time da Bears leave nothing to chance.
Carl - I agree Pat, I play Cribbage with a Lions fan, and I've never seen him so salty over any other game.
Todd - Anyone else craving pretzels?
Bill - I think controlling N'comiccon Suh will prove to be a chore, so I'm predicting a close game, Bears 40 Lions 2.
Pat - That close huh?  I could see that, after all the Lions are an up and coming team.

Bill - I'm really looking forward to the week 6 Vikings game.  There's just something about that Jarred Allen guy...
Carl - Jarred Allen?  You like watching Jarred Allen?
Bill - Yes, I like seeing that jackass go sackless.
Todd - Sackless.  Haha.  He's used to that, his wife made him cut his mullet.
Pat - I predict The Bear Jew, rookie tackle Gabe Carimi, will have a dominant game allowing Matt Forte to run wild, leading to an economically clock controlled close game and a Bears victory by the slimmest of margins...  I'll call it 35-0.
All - Da Bears!

Bill - Chicago next travels to London, England to take on that swashbuckling band of Buccaneers from Tampa Bay, in what is technically a home game for the Bucs.
Todd - (speaking in a poor English accent) Top o' da morning to you matey, trow anudder Polish sausage on the barbie.
Pat - I think you're mixing up your countries there Todd.
Carl - However I like what you did there with the sausage reference.
Pat - That Polish sausage reference is what saved you from sounding like a complete boob.
Todd - (still with the English accent) So pour me a pint of ale, with some crumpets on the side, and cherry O and a pip pip to you.
Bill - While I can appreciate your attempt at the accent Todd, it's not exactly good.  However, to stay with the British theme you've started, I see the Buccaneers getting their "Arse" kicked.
Carl - And I see their QB Josh Freeman spending a bit of time on his "Bum".
Pat - And I predict Da Bears win it "easy peasy" because at this point in the season their offense will be running "tickety-boo", and with the "smashing" way their D will be playing, the Bucs offense will be all "sixes and sevens".  And remember, Chicago will be off for a "fortnight" following this game and after "taking the biscuit" for seven straight weeks our boys in Navy and Orange could "fancy" a bit of a rest, and "Bob's your uncle"!
(they all look silently perplexed at the use of British slang dropped by Pat)
Todd - Did someone mention sausage?
Bill - Yes, Todd.  You did.  This is a perfect time for us to step away and allow ourselves time to partake in some adult beverages and some of the fine food here at Ditka's.
All - Da Coach!
Bill - Join us next time for part two, as we predict the remainder of the season.  Bear down my friends.  See ya soon.