Share All sharing options for: Taking a Look in the Bears History Book: Wilber Marshall, Part 1

Well folks, I'm back! After a seemingly endless chain of events (all good, luckily) I am finally settled and able to return to the best Bears site on the web! I figured that for my first History post back, I would look at one of our beloved '85 Bears. This man was an exceptional player, and is remembered for a number of stunning plays. Which is his greatest? Perhaps it was when he knocked Lions' QB Joe Ferguson out cold or the snowy 52-yd TD next to the Fridge during the '85 Championship game versus the Rams? Both are highlights every NFLer would be happy to have on their reel.

Join me after the jump to read Part 1 of my 2 part history lesson on the one, the only, Wilber Marshall.

Wilber Buddyhia Marshall was born in Titusville, Florida on April 18th, 1962. He went to Astronaut High School where, as a War Eagle, he became one of Parade magazine’s All-American high school football players.

Marshall attended the University of Florida in Gainesville, FL. He earned his athletic scholarship and was the number one linebacker from 1980-1983. Under coach Charley Pell, Marshall finished his college career with 343 tackles (58 for a loss) and 23 quarterback sacks. (The person who beat his school records in these two categories? Alex Brown.) He was also a member of the first Gator senior class to play in four bowl games and was only the third player in school history to be named a three-time first-team All-SEC pick ('81-'83). He was a two-time ('82-'83) consensus 1st team All-American (an honorable mention in '81). He also earned Sports Illustrated and Associated Press’ Defensive Player of the Week recognitions. In 1983, ABC Sports named him "National Defensive Player of the Year" and he was a finalist for the Lombardi trophy in both 1982 and 1983.

Many of you know the details of Wilber Marshall's time in Chicago. But for those of you who aren't familiar with the former Bear, here is a little snapshot for you. He was one of our '85 Bears. 'Nuff said. But no, really, Marshall was the 11th pick of the first round of the 1984 draft. He was a star linebacker of the team and wore #58. He was only 23 when he was innovating the linebacker position under Buddy Ryan. He states that innovation as holding him back from some of the talks about HOFers and major players: "I'm not saying I'm better than them, but I think I'm better at what I did," Marshall said. "I played behind the line most of the time, which is why I don't have as many sacks. But I have more interceptions. I'm hard to categorize.

"Wilber Marshall should be on his way to the Hall of Fame," said former Bears safety Shaun Gayle. "He was a defensive coordinator's dream. Usually, you can't find a guy who can rush the passer, cover a running back in the slot, drop back in coverage and plug the hole. Now they substitute three guys. If you look at the way linebackers are judged, they either do one or two things very well. But when you find a player so versatile, sometimes they don't get all the accolades and recognition — except from the players they played against."

Buddy Ryan did not make it easy for our rookie Bear, take it from Marshall himself:

"He drilled me," Marshall said of Ryan. "When I told him I wanted to play, he said, 'No way, you're a rookie.' I had to be intelligent enough to figure out how to get on the field. Then, when [defensive end] Al Harris sat out [the '85 season in a contract dispute], that was my chance and I convinced him I could do it."

"It's [formations, plays, schemes] ingrained in my head," he said. "Everything was orchestrated, nothing was freelanced. We had to take this test every Friday, and not just on our position. We had to know who and what was going on behind us. Buddy wouldn't let us play unless we knew all the coverages and every formation."

However, it worked. Ryan became so engulfed in his linebacker that he let him skip some weight training to preserve his body. (Which, as you can imagine, infuriated Da Coach.) "No question about it, Wilber was Hall of Fame-caliber," Ryan said. "He was one of the only linebackers who could blitz, sack the quarterback and make interceptions. He could bump and run with wideouts. He was gifted." 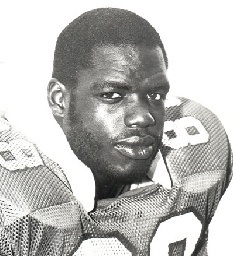 "Determined, nasty, hard-hitting, smart, knowledgeable — a pit bull," said fellow Bears linebacker Otis Wilson. "That's why we called him 'Pit Bull.'" He proved this name true in week 16 of the season, when Marshall hit Lions' quarterback Joe Ferguson so hard that he was knocked flat on his back and knocked out cold. (The Bears won the game 37-17.)

"Understand what I'm going to tell you," Dan Hampton said. "Wilber wasn't a dirty player — he was a vicious player. He played the game with an inner rage. He'd knock the living (stuff) out of you every chance he got. That creates an intimidation and fear that players don't want to talk about or acknowledge."

Another one of his most well-known moments came during the NFC Championship Game against the Rams. It had begun to snow and the fans were wildly cheering in the stands. During the next play after the applause started, Richard Dent sacked the QB Dieter Brock, causing a fumble. Marshall grabbed the ball and ran 52 yards into the endzone, next to the one and only William Perry. (The Bears won the game 24-0.) That snowy 52-yd TD was named Fox News Chicago's most iconic moment of the season. Here's what happened according to Marshall himself:

"I felt like I was in a dream," Marshall said. "We were in the 46 defense; we had a coverage blitz on from the middle; and we were coming with it. I did a loop inside [tackle Steve] McMichael, and the ball just popped out. They said it was Richard [Dent], but he got on top of him and Fridge actually caused it. It popped out, and I just picked it up. "It was just destiny. Everything was working that year. Every week we expected something crazy to happen, and it usually did." 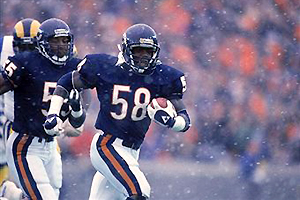 Marshall was also a beast in the Super Bowl. He recovered a fumble and recorded a sack. The next year, 1986, he recorded 5.5 sacks and 5 interceptions. For the first time, he was named First-Team All Pro.

Join me for Part 2 (CLICK HERE) to hear the rest of Wilber Marshall's story: his time after the Bears and after the NFL in general. We'll see you there!