Share All sharing options for: Taking a Look in the Bears History Book: Wilber Marshall, Part 2

Welcome to Part 2 of our history lesson about the "Pitbull" Wilber Marshall! Here's a link to Part 1, in case you can't, well, scroll down on the main page. Now we'll jump right on in to Marshall's career after Da Bears and his life after the NFL.

In 1988, WIlber Marshall became the first NFL free agent in 11 years to sign with a different team, the Washington Redskins. They offered him a 5-year, $6 million contract. When he left Chicago, Walter Payton autographed a photo for him, signing it, "To Wilber — the best outside linebacker in the game." There were free agents in the 80s, but nowhere to the extent that they are now. Players usually stayed with their drafted team unless they were traded. Free agents were people who weren't drafted, or cut by their team for whatever reason. Not many players were happy with that situation, and Marshall, along with a couple other players, sued the NFL on the grounds of "illegal restraint of employment" or some legal jargon along those lines. They stated that their contracts were up in 1988 and that they wanted to become unrestricted free agents after then. Surprisingly, they won. (I'm sure being a star linebacker of a Super Bowl team didn't hurt Marshall’s chances!) So Marshall was the first free agent to go to a different team, in a sense, and the Redskins paid 2 first round draft picks to Chicago for him. The two other gentlemen that sued with Marshall were practically blackballed out of the league and not contacted by any teams (although I read that injuries didn't help their case.)

I won't go into a lot of detail about the rest of his time in Washington, this is a Bears site, afterall. But he won another Super Bowl ring with the Redskins in the 1991 season. Following that year, he was named Second-Team All Pro and after the 1992 season was named First-Team All Pro for the second time in his career.

In 1993, Marshall signed a contract with the Houston Oilers and reunited with Buddy Ryan. When Ryan left the Oilers in 1994, Marshall joined him and the Arizona Cardinals for one season. He finished his career in 1995 with the New York Jets.

In his 12 seasons in the NFL, he recorded 45 sacks, and recovered 16 fumbles (returning them for 70 yds and 2 TDs). He also intercepted 23 passes (which were he returned for 304 yds and 3 TDs). This makes him one of the few players who have recorded 20 interceptions and 20 sacks in their career. He has also been nominated for the Pro Football Hall of Fame. 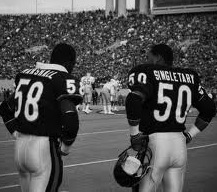 In 1999, Marshall was named a first-team selection to the "Gators Team of the Century" by The Gainesville Sun as well as the "Defensive Player of the Century." In 2007, 27 years after he graduated, he was recognized in the Florida High School Athletic Association's All-Century Team, naming him as one of the 33 greatest Florida high school players of the last 100 years. He was inducted into the University of Florida's Athletic Hall of Fame as a "Gator Great" and was entered into University of Florida's Ring of Honor in the same year (where he joined greats such as Emmitt Smith and Steve Spurrier.)

In 2008, he was elected to be the 5th Florida player ever to enter the College Football Hall of Fame with 12 other former players and 2 coaches, including Troy Aikman, Billy Cannon, John Cooper, and Lou Holtz (the latter two the coaches).

After football, Marshall's health declined as the years went on, and he suffered from injuries he sustained during his NFL years. He had initially refused surgery for his injured spine, shoulder, and knees. He fought with the NFL and the players' union over a settlement pertaining to his injuries. Basically, he was granted disability benefits after retirement, but because some doctors agreed that he was disabled and others said he could do sedentary work, he lost a substantial amount of those benefits. In 2008, he won his lawsuit for total disability benefits with the Bert Bell/Pete Rozelle NFL Player Retirement Plan. By the time he won his battle, he had already had to file bankruptcy.

*Side note: Marshall and Al Davis are the only two people who have won two different court cases against the NFL. 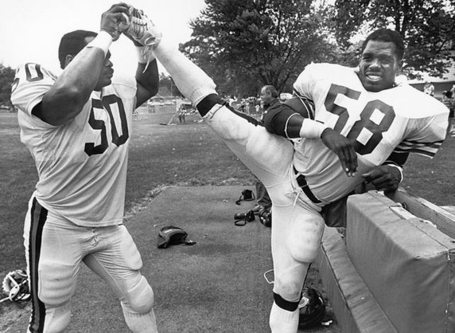 Marshall is currently 49 years old and resides in suburban Washington D.C. He has two teenage daughters. He still suffers daily from the injuries he sustained during his 12-year NFL career.

"I get spasms in my neck and can't sleep at night, which is worse than my knees," Marshall explained. "They give me shots, but because of the head blows and the pressure [in the spine], my vertebrae are pushed together tight. And because of [pain in] my tailbone, I can't sit for more than an hour at a time."

Some people say he is avoiding getting his knees replaced so that he can stay on disability. He refutes this, and states:

"I have to have an osteotomy first because of [old] fractures on both sides of my knees, which requires them to break my leg in two places. My doctors told me several months ago that at the current weight I was at [about 300 pounds], I'd have to have it again in four to five years. Why would I want to do that?"

He can only get by with small amounts of exercise: occasional swimming, walks in the morning and once in a while, stationary bike work. The thing that worries him the most is his memory loss: "My dad had Alzheimer's. Is it that, or is it from the blows? That scares me more than anything."

Marshall is still in a financial dispute with the Bears, which the team denies, but Wilber wants fans to know that it's not because of them that he hasn't been to Bears reunions - it's the mess in court over retroactive payments:

"I hope Bears fans will forgive me for not being at the reunions," Marshall said. "I want people to know I'm not bitter toward everybody in Chicago. I loved the team, I loved the fans. They treated me like the king of England, and I played my heart out for them. But the reason I haven't been there is to fight for my life. I don't want to be run over. "

So while the ending of our lesson is not the most cheerful, Marshall should be remembered for the hard-hitting, rough and tough, but yet versatile linebacker that he was. We'll end with a story from Leslie Frazier, Wilber's former teammate, which will make any Bear smile:

"I loved playing with Wilber," said Frazier, now the coach of the Minnesota Vikings. "We were playing the Colts that championship season and someone cheap-shotted him, and he said, 'Les, I'm going to get him, you watch, I'm going to get that guy.'

"We were lining up for a field goal, and Wilber just absolutely cleaned his clock. They had to take him out on a stretcher. I wanted to be in a foxhole with him.

"He was a tremendous athlete, and we missed him and his talent. Who knows if he would have stayed and we had a healthy quarterback, what would have happened?"

"When people ask me 'What play do you remember most?'" Frazier said, "I think of that play, when the snow began to fall."

And as always, you can find stats here and here.

Any other players you'd like to see on Taking A Look in the Bears History Book?